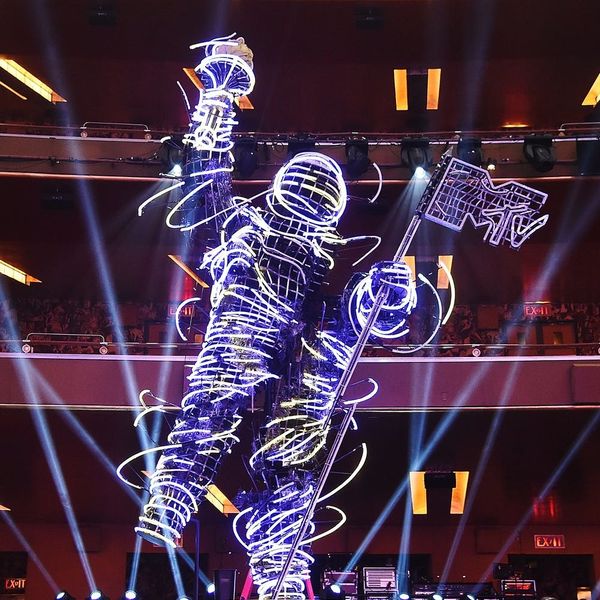 Welcome to Brit + Co’s Weekly Entertainment Planner! Each Monday, we highlight one thing we’re excited about in six categories — movies, TV, music, streaming services, podcasts, and a bonus pick from all of the above — to help you navigate your week in watching and listening. Check out our picks for the week of August 20 to 26 below. Your eyes and your ears will thank us!

Searching (August 24): John Cho and Debra Messing star in this modern psychological thriller told entirely from a computer screen. As David Kim (Cho) tries to find his missing daughter, he uses her online history for clues and, in the process, uncovers things about her that he didn’t expect. Searching opens in theaters on Friday, August 24. (Photo via Sebastian Baron/Sony Pictures)

2018 MTV Video Music Awards (August 20): Cardi B is the early frontrunner for this year’s VMAs with an impressive 10 nominations, and the new mom will also be opening the show just a month after welcoming her baby daughter Kulture. The rest of the ceremony will be star-studded, too, with performances from Ariana Grande, Nicki Minaj, Shawn Mendes, and more. Plus, Jennifer Lopez is set to receive the 2018 Michael Jackson Video Vanguard Award, and we’re holding out hope for an epic medley of all her hits. The VMAs air on Monday, August 20, at 8pm ET on MTV. (Photo via Nicholas Hunt/Getty Images)

The Innocents (August 24): This British supernatural thriller is one of Netflix’s most talked-about titles this summer. The coming-of-age sci-fi drama follows 16-year-old June and her boyfriend as they run away from June’s controlling father — only to discover that she’s a shapeshifter. It sounds totally binge-able. Watch it all when it drops on Netflix on Friday, August 24. (Photo via Aimee Spinks/Netflix)

Up and Vanished season 2: The second season of the hit true crime podcast will tackle the case of Kristal Anne Reisinger, a missing woman from Colorado. Episode 1 premieres on Monday, August 20.

Afropunk Festival (August 25 and 26): Janelle Monáe, Erykah Badu, Tyler the Creator, Jaden Smith, Willow Smith, and others will take the stage at the annual arts celebration festival in Brooklyn. This year, for every ticket bought, the fest will give one additional ticket to youth in NYC who participate in “diversion programs with arts organizations,” so you can feel extra-good about going. The festival takes place at Commodore Barry Park on August 25 and 26. (Photo via Cindy Ord/Getty Images for Lord & Taylor)

Carpool Karaoke: When Corden Met McCartney Live From Liverpool (August 20): James Corden released a Carpool Karaoke segment with none other than Sir Paul McCartney back in June, and now the clip is getting an hour-long expanded special of its own. It airs Monday, August 20, at 8pm on CBS. (Photo via Craig Sugden/CBS)