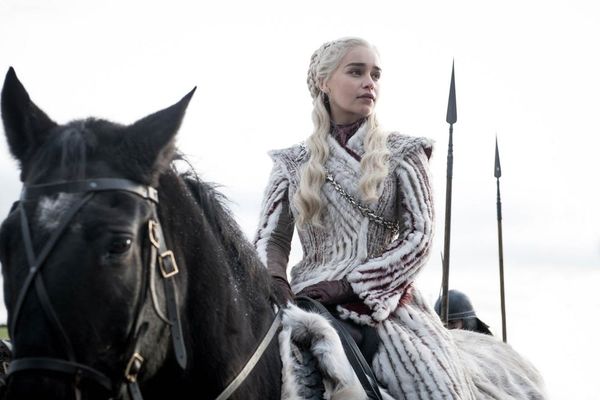 Welcome to Brit + Co’s Weekly Entertainment Planner! Each Monday, we highlight one thing we’re excited about in six categories — movies, TV, music, streaming services, podcasts, and a bonus pick from all of the above — to help you navigate your week in watching and listening. Check out our picks for the week of April 8 to 12 below. Your eyes and your ears will thank us!

Little (April 12): We’ve been dying to see Little since the trailer first dropped in January, and now Issa Rae, Regina Hall, and Black-ish‘s Marsai Martin are finally making their way to the big screen with their heartwarming and hilarious take on the classic body-swap genre. It’s one of several movies by and about women hitting theaters this year, and we plan on seeing ’em all. (Photo via Eli Joshua Adé/Universal Pictures)

Game of Thrones, Season 8 (April 14): The final season in the HBO epic is finally here — and whether you’ve been following the show all these years or not, it’s about to become the only thing you hear about for the next several months. If you have been watching (and waiting almost two years now for the conclusion), it’s time to prepare yourself emotionally: HBO executives have teased what sounds like an absolutely devastating finale. The first episode of the final season airs on Sunday, April 14, at 9pm ET on HBO. (Photo via Helen Sloane/HBO)

The Perfect Date (April 12): The To All the Boys I’ve Loved Before sequel is likely still many, many months away, but luckily for us, Netflix is dropping another rom-com starring Noah Centineo this week. The breakout star plays a Yale hopeful who makes money for college by giving women the option to hire him for dates — and dictate his likes, dislikes, personality, and more. Lady Bird‘s Laura Marano and Riverdale‘s Camila Mendes also stars. (Photo via Netflix)

The Murder Squad: Jensen & Holes: Just when you think you’re burnt out on true crime, a new show, book, or podcast comes along to re-spark your interest. Case in point: The Murder Squad, hosted by retired investigator Paul Holes, who caught the Golden State Killer in 2018, and investigative journalist Billy Jensen, who helped complete late author Michelle McNamara’s book on the famed California serial killer following her sudden death in 2016. The two have teamed up for a new show on My Favorite Murder hosts Karen Kilgariff and Georgia Hardstark’s Exactly Right podcast network, where they re-examine cold cases together. Listen online, or subscribe wherever you get your audio content.

Coachella kickoff (April 12): The famed two-weekend festival kicks off in Indio, California, on Friday, April 12, continuing on the 13 and 14, and then again the following weekend on April 19, 20, and 21. Childish Gambino will headline both Friday nights, Tame Impala will close out both Saturdays, and Ariana Grande is on tap as Sunday’s headliner. There’s also the recent addition of Kanye West’s Sunday Service gospel show as an Easter Sunday sunrise special. (Photo via Christopher Polk/Getty Images for Coachella)

Fosse/Verdon (April 9): FX is about to unleash a new miniseries that may feel a little out of left field for the average viewer but is too stacked with talent not to see. The drama will explore the real-life relationship between famed filmmaker/choreographer Bob Fosse and dancer Gwen Verdon, played respectively by Sam Rockwell and Michelle Williams, and is produced by Hamilton‘s Lin-Manuel Miranda, The Americans‘ Joel Fields, and more. See? We told you. Check it out on FX starting Tuesday, April 9.