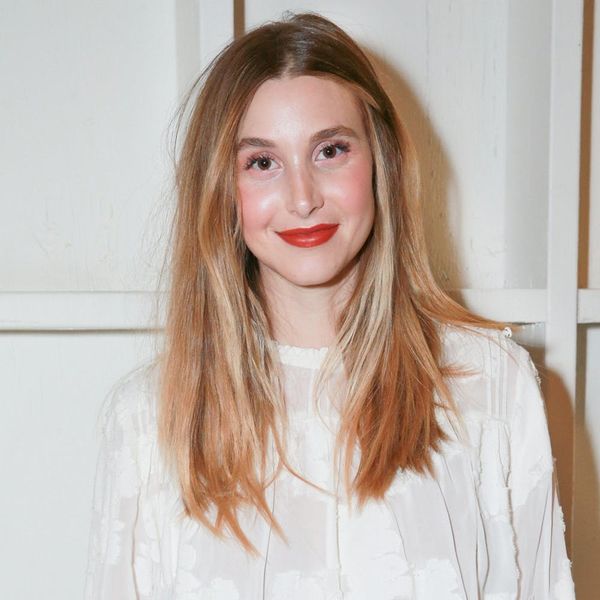 Whitney Port has been pretty open about life with baby since giving birth to her son, Sonny, three months ago: the good, the bad, and the ugly. Just a few months back, she opened up about the societal pressures she’s faced to breast feed via her YouTube channel I Love My Baby But… , and now the former Hills star is addressing yet another aspect of mom life — her changing physique with a new post entitled “I Love My Baby, But I Wish My Body Didn’t.”

Port posted an excerpt of the video on Instagram, saying she “immediately panicked” after discovering she was pregnant for fear of changes her form would undergo. The one thing that helped her get through the negative feelings, she says, was reminding herself that her body was “creating something so wonderful, so beyond… comprehension or sensibility.”

Still, the thought of losing control of her own body was a difficult concept for her to come to terms with. Port says she gained a healthy 40 pounds during her pregnancy, and though she recognized the necessity of pregnancy-induced weight gain, the rapid transformation impacted her self-esteem. “The weight gain did not make me feel good about myself,” she confessed in the video. “I didn’t really want to get dressed; putting together outfits was stressful.”

In fact, it wasn’t until her third trimester that the fashion designer finally “decided to enjoy” herself instead of worrying about what she couldn’t control — which, according to a pic in the video, included munching on fried chicken and French fries (mmm!). “I started to become at peace with the weight gain and only cared about bringing a healthy baby into the world,” she explained.

I feel a little superficial for caring about the fact that my body was going to change so tremendously from pregnancy and birth. When I first found out I was pregnant, I immediately panicked about not being in control of my body and it got increasingly harder to feel good in my own skin. I constantly had to remind myself that my body was creating something so wonderful, so beyond my comprehension or sensibility. Towards the 3rd trimester I started to become at peace with the weight gain and only cared about bringing a healthy baby into the world. And then it hit me...I’m about to push an 8 lb baby out of a teeny little place and produce milk out of my once awesome boobs! Yikes! Cue the panic again! In Chapter 26 of I Love My Baby, But...I Wish My Body Didn’t Have To Change, I discuss all the weird things that happened to my body, how I dealt with them, how Timmy reacted to them, and how I still can be secure and insecure about it at the same time. Yes, it’s a miracle, but it’s also INSANE! Would love to hear how you guys handled your body changes!  Oh & btw- I allude to breast feeding being my friend in the video & what I meant by that is it has helped me lose weight quickly- but y’all know how that journey has been.😏😘 Click link in bio to watch!

In addition to speaking openly about weight gain in the video, the former MTV star also voiced her concerns about differences down below. “Having a vaginal delivery changes everything down there,” she said. “It’s something that’s really not discussed.” Port, 32, dared to go there, however, opening up about how she feared a declining sex life with husband Tim Rosenman, despite his assurances he always has and always will find her attractive.

The Whitney Eve CEO said that she felt “a little superficial” for caring so much about her body, but we have to applaud her for speaking so openly about a topic that so many women can relate to. The video post has already gleaned 40,000 views and countless comments, many from postpartum moms who are praising the star for candidly discussing such a relatable topic.