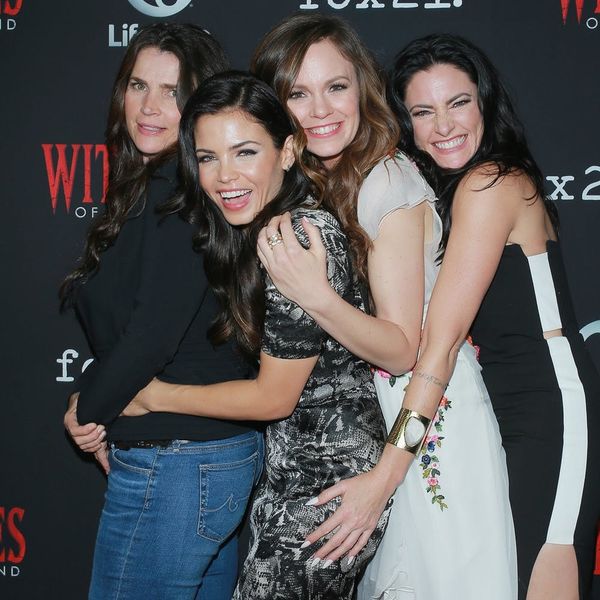 On the heels of a massive television cancellation list, we were already having some serious watchers’ remorse, but this Instagram reunion between The Witches of East End cast members Jenna Dewan-Tatum (AKA the much-revered object of Channing Tatum’s affections — check out his epic Mother’s Day tribute to her!), Rachel Boston, Madchen Amick, Daniel di Tomasso and Eric Winter toyed with our emotions like none other.

Fans (us included!) were crushed when the Lifetime show, based on the book of the same name ($9), prematurely ended after just two seasons in 2014, and took to the Internet to express their displeasure with a petition that quickly gained hundreds of thousands of signatures.

With plenty of dreams left for the Beauchamp and Gardiner families (Joanna and Wendy had a sister? And she’s in Hell? WHAT?) to address, hope resurged when the show became available for streaming on Netflix in 2015, sparking anticipation of a pick-up. So far, though, there’s been no word on any type of official reunion.

Until now, that is! The show’s former cast members took it upon themselves to make the much-lauded gathering happen, meeting up for laughs and even re-takes from their beloved series. Officially proclaiming the meet-up “Witches reunion night,” Rachel Boston posted this group shot, making our hearts skip a beat with a joy.

Adding to the fanfare, Jenna posted these hilarious vids of the crew yukking it up in between some takes. “Well when we reunion, we REUNION,” she said, adding, “You can imagine what our blooper reel was like.”

Are you excited to see the cast together again? Let us know over @BritandCo!

Nicole Briese
Nicole is the weekend editor for Brit + Co who loves bringing you all the latest buzz. When she's not busy typing away into the wee hours, you can usually find her canoodling with her fur babies, rooting around in a bookstore, or rocking out at a concert of some sort (Guns N' Roses forever!). Check out all her latest musings and past work at nicolebjean.com.
Netflix
Entertainment
Netflix
More From Entertainment