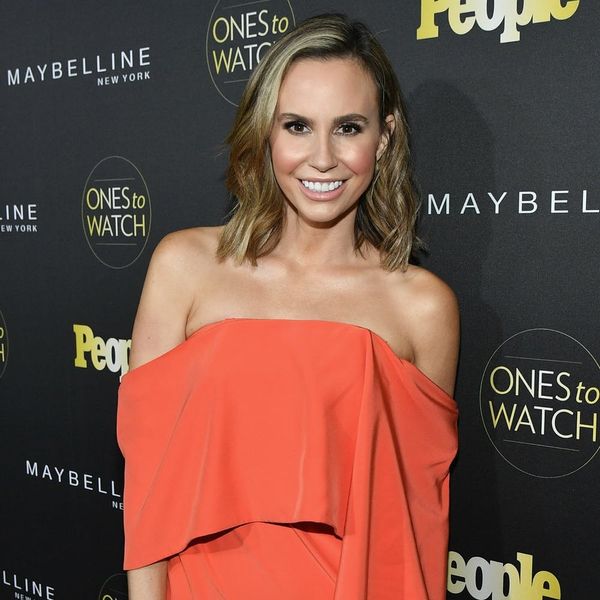 Believe it or not, the holidays are just around the corner, and nobody knows it better than Keltie Knight (and maybe Adele, who’s already made tentative plans to spend it with J-Law). Born in Canada, The Insider host has not only already celebrated her native Thanksgiving (Canada celebrates on October 10), she’s gearing up for her second year in a row as co-host of the Thanksgiving Day Parade Live on CBS alongside Kevin Frazier. “I have worked on Thanksgiving my entire adult life!” Keltie tells us.

Incidentally, she has learned to “create mini Thanksgivings wherever [she] can.” While the rest of us are apron-deep in sweet potato parfait and stuffing cup recipes, Keltie’s got her own agenda. Last year, for instance, after a 3:30am wakeup call to host the parade and a much-needed nap thereafter, she and husband Chris Knight did the unthinkable and had — wait for it — pasta for dinner.

“We went to Little Italy and had pasta. We had Italian food for Thanksgiving!” she says with a laugh.

While she concedes that the food was amazing, for Keltie, what’s on the menu isn’t her main concern come Thanksgiving, anyway — unless it’s pumpkin pie, made by Chris’s family, that is. In fact, Chris’s family makes pies so good that the couple had them in lieu of a wedding cake, along with mashed potatoes (“A mashed potato will change your life if it’s made creamy and delicious,” she says). Instead, she says it’s a moment to reflect back on your year and realize just how lucky you really are. With today’s social media practices making it ridiculously easy to compare yourself to, well, everyone, Keltie uses Thanksgiving as a time to stop and remember how great she has it — even when she’s facing what she calls her very own Leslie Jones moment.

Despite her status as an attendee at this year’s Emmy awards, Keltie said it was no easy task finding someone to dress her for the event. So? She took matters into her own hands, as she admittedly often does. “I love finding something that’s almost there,” she tells us. In this case, that would be a — get this — $200 Jovani prom dress that Keltie revamped. “I altered it like a crazy person,” she says.

After she finished taking in the train and making several other major adjustments, no one was the wiser — including Marie Claire’s creative director Nina Garcia and supermodel Heidi Klum, who both gave her major props for her look.

It’s a maneuver she says she’ll be repeating come Thanksgiving Day. While she’s feeling velvet and metallic for this season’s holiday go-tos, her outdoor gig will require a slightly more bundled look instead. Determined to wear yellow for the occasion (she wore a bright red coat last year), Keltie took to Poshmark when the perfect garment failed to present itself. “Yellow is not a hot color for coats this year,” she laments. Scoring her dream J. Crew jacket on the secondhand site for just $40, she’s given it the Keltie touch, trading brown buttons for yellow ones and removing its black belt for a more monochromatic look.

“I’m a massive Poshmark fan,” she gushes. “I’m addicted to the app.”

She’s also a bit of a craft fanatic, making this the perfect find. “I’m such a crafty person,” she admits. In addition to her clothing alterations and her current project (remodeling her entire office), Keltie says, “I’m always making crafts for my interviews.”

Case in point? For Selena Gomez’s birthday, Keltie made tiaras comprised of her favorite of Selena’s red carpet looks using spray adhesive, cardboard and a glue gun. It was a pretty cool move to be sure — though she says she might not have been so chill had it been one of only two stars that still make her nervous, even after having interviewed nearly everyone in the biz: Oprah and Paula Abdul.

“When you meet Oprah, it’s like her eyes look at you like nothing else matters,” she says.

And as for Paula? “Paula Abdul was my life growing up,” she explains. “I wanted to be Paula so badly!”

It’s for that very reason that Paula is NOT on her wish list of performers at this year’s parade. “I wouldn’t be able to do my job,” she says in all seriousness. “I won’t be able to breathe already — it’s a very nerve-wracking gig!” (We can’t imagine why: Last year reportedly drew 22.3 million viewers.)

Instead, Keltie (who says she doesn’t have the inside scoop, thanks to her inability to keep a secret) is hoping to see big-name performers such as Jennifer Lopez, Adele, Celine Dion, DNCE or Maroon 5 instead. As a professional dancer herself and former member of the Rockettes (!!), Keltie is also pretty pumped to watch dance groups and bands from all over the world do their thang. “It’s really cool to be hosting,” she says. “[You] have the best seat in the house! You’re excited, watching those kids’ dreams come true.”

Not that she wouldn’t get out there again herself if given the chance — “I’m available! I’ve [still] got some moves — I work out!” she jokes.

Instead, Keltie says she’ll be resigned to the jig she says she’ll do with co-host and IRL friend Kevin to get pumped for their gig.

And after that? If all goes according to Keltie’s (traditionally untraditional) plans, she’ll FINALLY be seeing Hamilton, tickets to which the play’s star Renee Elise Goldsberry promised her on-air last year.

Are you excited to tune into this year’s parade? Share with us @BritandCo!

Nicole Briese
Nicole is the weekend editor for Brit + Co who loves bringing you all the latest buzz. When she's not busy typing away into the wee hours, you can usually find her canoodling with her fur babies, rooting around in a bookstore, or rocking out at a concert of some sort (Guns N' Roses forever!). Check out all her latest musings and past work at nicolebjean.com.
interview
Celebrity News
interview
More From Celebrity News