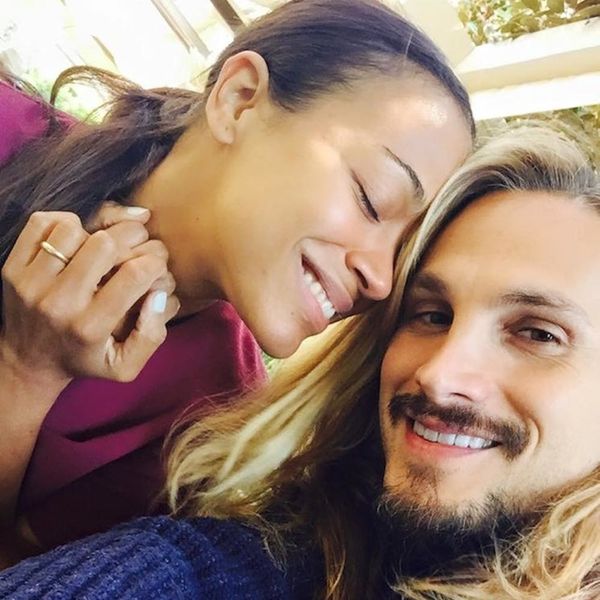 Recently we reported that Zoe Saldana’s husband Marco Perego took her last name after they wed. Since then, the Internet has lost its collective mind so Saldana took to her personal Facebook to address the haters (read “sexist crybabies”) and we’re in love with her response.

She urges all “fathers, sons, brothers and men” to calm down, promising that “your legacy will not perish if you take your partner’s surname or she keeps hers.” She goes on to say that she was initially worried about her husband’s choice until he assured her “I don’t give a sheeeeet (sic).” Just picture a hot man with an Italian accent saying that phrase and have yourself a little desk smile while you’re at it.

Saldana addresses the ridiculous double standard our culture has when it comes to marital last names saying “women have never been asked if it’s okay for them to give up their names,” and says that any husband who takes his partner’s name will be “remembered as a man who stood up for change.”

The cool thing about this social post is that it’s really just the first step towards a tradition-breaking future. Taking the female partner’s name isn’t an entirely new phenomena — non-celebrities have been at it for years — but putting such a proud public face on the issue is a step in the right direction for widespread change. Our grandchildren may look at taking the husband’s last name as a sort of folksy, antiquated thing. Basically their version of “candy for a nickel” or “walking five miles to school in the snow.”

Saldana closes her statement with a rallying cry for the modern man: “Gentlemen, I implore you to think outside the box — remove the box altogether. Let’s redefine masculinity. A real ‘man’ leads alongside his partner. A real man accepts his mortality. A real man acknowledges that nothing can be done alone.”

So yeah, call us Brit + Co Saldana from now on.

Would you take your partner’s name or vice versa? Let us know in the comments.

Molly Sanchez
Molly Sanchez is a writer, comedian and lover of burritos everywhere. She has written for The Bold Italic, Liquid Bread, Thrillist and HelloGiggles. She devotes her time to Bloody Mary research, exploring San Francisco and promoting wide spread shower beer awareness and appreciation. Find her on Twitter @seriousmolly trying to get famous people to laugh at her jokes or on Instagram @mollyfuckingsanchez where she swears a lot.
marriage
Home News
marriage
More From Home News