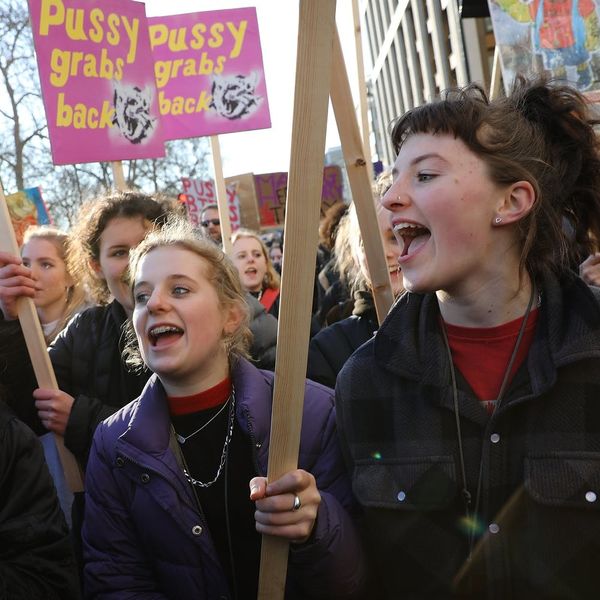 As hundreds of thousands of women gather in Washington DC (and 600 other cities around not just our nation, but the country: This group even joined from a boat in Antarctica!), for today’s historic Women’s March, sporting their best #nastywoman merch and DIY “pussyhats,” social media is abuzz with first-person accounts from the historic events taking place.

Not surprisingly, the hashtag #WhyIMarch is absolutely blowing up, and it’s sparking MORE than enough hope to “trump” any misgivings you may have had about yesterday’s inauguration. Don’t believe us? Check out these 10 Tweets to get your inspiration levels up to 1000 percent: You’re gonna need it in the four years to come!

1. @profe105: Linda marched to stand up for herself and those bulled by others.

#WhyIMarch: for my wife, mother, and grandmother. And all the other women in my life. #WomensMarchAtlanta

2. @rockyraffle: Reminding us that the Women’s March isn’t only for women, Rocky, like many awesome guys, is marching for all the women in his life.

3. @WeekendnMuskoka: Twitter user Dawn spotted one protestor in Canada who couldn’t believe he still HAD to march for the issues at hand: “I can’t believe we still have to protest this sh*t,” read his sign.

4. @cre8ivetype: Jillian and her friends made a seriously strong statement when they showed up in their suffragette-inspired outfits, marching for those that came before them and saying “Same sh*t, different century.” Yep.

#WomensMarch #WhyIMarch So that my sons have some semblance of a future with all of their freedoms on which this country was founded.

5. @ResistinginNYC: Looking to the future, Joi is marching for what’s yet to come, making it a point to remind us all that kids deserve “a future with all of their freedoms on which this country was founded.”

Because I have more choices than my grandmothers did. #whyIMarch

6. @foodityourself: Mollynda marched for those in her family that couldn’t, because she now had the privilege and freedom to do so.

7. @brekky94609: In Oakland, Brekky donned her Hills shirt proudly to let everyone know who it was that she was marching for.

#whyimarch To stand in solidarity with my fellow women of color. I see you and love you ❤ #wmwri

8. @AshleyNicoleHen: Ashley marched for her fellow minorities and their deserved equality as both women AND people. “I see you and love you,” she said, quoting Tracee Ellis Ross’s Golden Globes acceptance speech.

9. @Isloanetherapy: In San Francisco, Lily got creative while prepping to battle the elements with a DIY umbrella, complete with sketches of a uterus and a list of everyone she’s marching for. Brilliant!

10. @mikefinke: It may be simple, but this sign spotted in NYC is making us emotional AF. Not one, not two, but millions of people around the country are marching “for every daughter in America” and THAT is truly a beautiful thing.

We want to see all of your #WhyIMarch posts — tweet us @BritandCo!