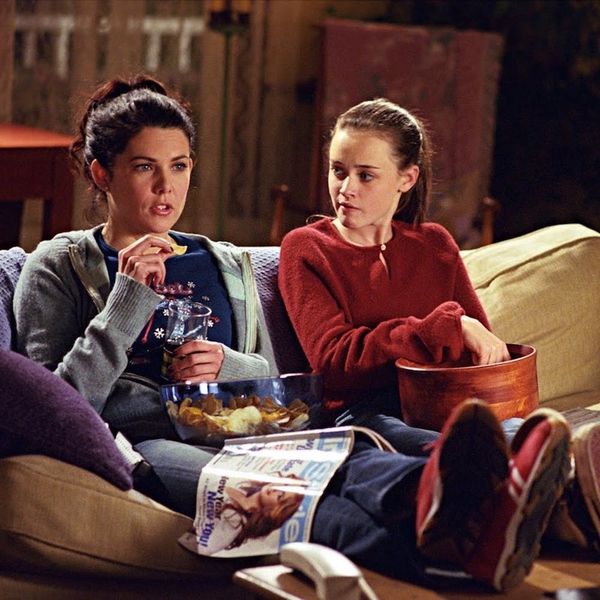 TV moms have a way of making us cringe, cry, laugh and think. Whether they were outright power moms and #girlbosses or quieter forces of nature, each of the most recognizable matriarchs had their own way of teaching us some pretty valuable lessons and, more importantly, showed us that parents are people too. With the revival of Gilmore Girls on Netflix, let's have a fun little look back on 10 TV moms who kept it real week after week.

1. Lorelai Gilmore, Gilmore Girls: The junk food loving, free-spirited Lorelai Gilmore fast-talked her way from Stars Hollow into everyone's hearts as the complicated, yet lovable mom to Rory. She gave amazing advice wrapped in a punchline and taught us all that the best thing you can be is authentic to yourself. (Photo via WB/CW/Warner Bros. Television Distribution)

2. Daenerys Targaryen, Game of Thrones: The mother of dragons proves you don't have to actually have human children to be a mom. She's walked into and out of fires unscathed, hatched dragons, freed slaves, learned an entirely complicated language in a blink and kicked general ass in the name of righting the injustices throughout a good part of the seven kingdoms. (Photo via HBO/Warner Bros. Television Distribution)

3. Claire Dunphy, Modern Family: There's keeping it real and there's Claire Dunphy. She holds it all down while remembering everything on everyone's checklist and gives the best reactions to her husband's awkward outbursts and extended family's shenanigans. (Photo via ABC/20th Television)

4. Jessica Huang, Fresh Off the Boat: Who rules the world? Mrs. Huang does. Jessica has a competitive spirit that rivals any Olympian and owns everything she does. She's loud, aggressive and not afraid to give anyone the cold, hard truth. If most of us could lay it down half as well as Jessica, we'd all be ruling the world in a much more orderly (and hysterical) way. (Photo via 20th Television/Disney–ABC Domestic Television)

5. Sophia Petrillo, Golden Girls: She's sassy, Sicilian and she's the golden girl everyone wants to be in retirement. From incredible one-line zingers to heart-to-heart moments that usually end with a back-handed compliment, Sophia's habit of calling it down the line made her the loveable fourth roommate we would all secretly like the best. (Photo via Buena Vista Television/NBC)

6. Nancy Botwin, Weeds: Should this be prefaced with season one Nancy? Probably. She went from mourning widow to successful entrepreneur and showed us how to shirk public opinion in favor of what works for you. Her actual parenting skills should be put in our “10 Worst" list, but her genuine nature and quick wit in the face of actual danger lands her on this list of moms who would be fun to know (but maybe not have stay over at your house.) (Photo via Lionsgate/CBS/Showtime)

7. Marge Simpson, The Simpsons: What would Homey do without Marge? She's the pearl-wearing silent force that puts the function in dysfunctional. She can do anything she puts her mind to, and she is the literal glue that holds not only her family but also her whole town together. (Photo via FOX/20th Television (1989–2020)/Disney–ABC Domestic Television)

8. Claire Huxtable, The Cosby Show: Claire was the #girlboss before hashtags mattered. She's was a partner in a law firm, ran a tight ship at home and killed with serious side-eye. She kept five (FIVE!) children in check, as well as all of the extra people they accumulated through the seasons, and Claire was the greatest example of how straight-shooting and level-headed confidence can rule the world. (Photo via Mill Creek Entertainment/Carsey-Werner Distribution/NBC)

9. Lucille Bluth, Arrested Development: So maybe Lucille's straight talk wasn't necessarily altruistic. She had no idea what the cost of a banana was (hint: It's not $10) and most of her comments could easily have been blamed on her breakfast cocktail, but she said exactly what she was thinking at the very moment she was thinking it. She took no s#!t from anyone and gave us all some cringe-worthy advice to quote long after the show was over. (Photo via FOX/Netflix)

10. Violet Crawley, Downton Abbey: She asked the question “What is a weekend?" because she genuinely didn't know and she didn't care what anyone thought. In a post-Victorian era that was changing fast around her, the Dowager Countess met adversity with adaptable wit and a zero tolerance for other people's problems. She simply continued living her life and kept it real. Every. Single. Day. (Photo via PBS/ITV)

Did your favorite straight-talking TV mom make the list? Tell us who your fave is @BritandCo!

Maggie Henderson
Maggie is a content marketing and advertising maven by day and a blogger by night. When she's not window shopping online, you can find her looking for inspiration on Instagram and Pinterest, traveling to new adventures, and chasing after her dog and toddler son.
entertainment
Relationships
tv moms tv shows netflix entertainment