8 Trends from 2016 We Immediately Regret Wearing 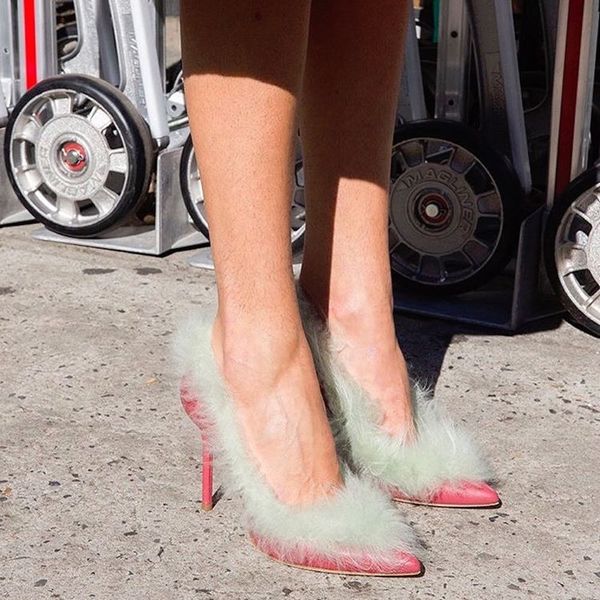 Even the most stylishly clad Instababes fall victim to a fashion faux pas (or three) at some point. Yes, that includes super-bloggers like Chiara Ferragni of The Blonde Salad, and we’ve got the incriminating evidence (or rather, snapshots) to prove it. Best described as a domino effect of sorts, it’s all too easy to trick ourselves into thinking a certain trend (cough, cough, a harness belt) is actually a good idea. Fast-forward six months and it hits us like the blustery air on a frigid January day that we could not have been more naive. Sorry, not sorry, but ugly-pretty Crocs are just that: UGLY. Don’t even get us started about stirrup leggings and frilly hem trousers — those are still up for debate, natch. For better or worse, we’ve compiled a list of eight trends from 2016 we immediately regretted wearing. Fingers crossed they won’t see the light of day in 2017. Good riddance.

1. Fur on Fur: As if wearing a fur overcoat wasn’t enough, Chiara thought a pair of furry mules (topped with a blush pink bow, no less) would elevate her to street MVP status. WRONG. Best reserved for the bedroom, her luxe slip-ons do little to downplay her Cruella de Vil-inspired topper that reads full-fledged diva. Before reaching for a (faux) fur topper or fuzzy accessories in the new year, keep in mind that less is *so* much more.

The La-Z-Boys of fine footwear, ladies and gentlemen.

2. Fuzzy Steppers: Interesting in theory, and man-repelling in their own right, fuzzy steppers are the WTF-worthy trend that had us all scratching our heads in amusement. TBH, we’re still trying to figure out what makes them so dang appealing to fashion editors. While they look passable with a Fozzie Bear-inspired textured coat and boardroom-ready culottes, their steep price often doesn’t account for their lack of wearability. Less chic, more frivolous, these babies would be best reserved for someone with Miss Piggy’s demeanor. Or, better yet, not worn at all.

<a few of my favorite statement piece on the blog today 👊🏻> http://liketk.it/2pynf @liketoknow.it #liketkit #nordstrom @nordstrom

3. Overly Exaggerated Sleeves: We love you, Bee, but the overly exaggerated sleeves have got to go. The voluminous style shown above reads far too fashion-forward and outlandish for the majority of us gals with easy-going nine-to-five style sensibilities. If you want to make a statement, stick to retro bell sleeve dresses and blouses for a trend-right look that won’t cramp your style in the new year.

4. Too-Cropped Top: If your crop top is cropped in such a manner that you’re inadvertently showing off *ahem* more skin than you bargained for, then you may (read: you will) want to go back to the drawing board. While we’re advocates for the “crop that top” movement, there’s something to be said about leaving at least a little to the imagination. Going into 2017, embrace all your midriff-baring, Coachella-bound mock-neck style crop tops, but do so tastefully. Sorry, Chiara, there’s always next time!

5. Wearing a Harness Belt… Just NO: The moment Taylor Swift was spotted rocking a harness in public, we all died a little inside simply because we *knew* there’d be countless outfit imitators (or shall we call them offenders?) just waiting to follow suit. Harnesses are designed for horses, people! SMH. Moving forward, just say no. Capiche?

6. Dress Over Pants: Call us crazy, but we’re fans of practicality when it comes to our daily sartorial choices. Unless we’re missing something here, the whole dresses over pants trend doesn’t exactly scream functional. If anything, it feels overly fussy and frumpy if you don’t know what you’re doing. (And, let it be known, we don’t have a clue.) While we’re sure this combo consisting of a blouse, a black slip dress and raw-hem jeans packs on the extra warmth during the dead of winter, we’d so much rather just slip on a floor-length puffer and call it a day. Come spring, proceed to ditch the denim for an off-duty getup that slays.

Summer = as little clothes as possible 👌🏼😁

7. Barely-There Tops and Bralets: Welp! There’s a reason bralets and scantily clad tops were designed to be worn as undergarments — they’re to be worn under your clothing or strictly for after-hours. (See point above about embracing mindful crop tops.) Take note: In the scorching summer heat, a modest-is-hottest mentality is always considered “in.” You don’t have to tell us twice.

8. Tulle IRL: File this under things that only Carrie Bradshaw can pull off. While we initially la-la-LOVED the idea of sporting a Cinderella-worthy tulle skirt on the streets — give or take a pair of Miu Miu’s coveted grunge-inspired ballerinas — it just doesn’t quite translate IRL. Womp, womp. Although Susie Bubble looks lovely in her frothy gray tulle number, she’s clearly the exception. You could say we’ll be passing on this trend in 2017.