15 Reasons Why Red Is the Must-Have Color RN 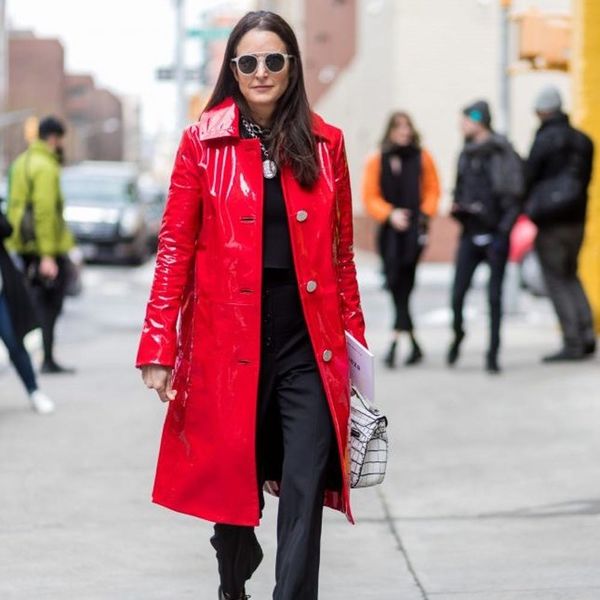 Trendspotting at New York Fashion Week has us seeing red — literally. Not only are models being sent down the runways wearing every shade of Fall 2017’s It-color, but they’re rocking red makeup too — from lipstick to eyeshadow! Heck, even the street-style crowd is getting in on the action, with trendsetters all over NYC adding a pop of the color to their fashion week lewks. Keep scrolling to get a peek at how the industry is painting the town red this season.

1. Classy in Crimson: Victoria Beckham proved there is pretty much no such thing as clashing anymore. (And that mixing shades is a totally fresh way to wear the trend). (Photo via JP Yim/Getty)

3. Fabulous With Fuchsia: Adam Selman brought the sexy, as per usual. Then he added a dash of fuchsia. (Magenta? Who cares — it’s gorge.) (Photo via Noam Galai/Getty)

4. Sultry in Scarlet: Prabal Gurung offered up his take on the pantsuit in a rich scarlet. Gurung completed the look with a minidress underneath — because button-downs are so predictable. (Photo via Neilson Barnard/Getty for New York Fashion Week: The Shows)

6. Statement Lip: Speaking of lips, Michael Costello was all about the classic, bright red. Nothing punctuates an all-white look quite like a look-at-me lipstick. (Photo via Neilson Barnard/Getty)

7. Muted Red: If you’re more on the toned-down side of things, Jenny Packham served up a more muted version of the red lip. Just punchy enough to get the job done! Matching moto not required. (Photo via Peter White/WireImage)

9. Color-Block Shadow: This is what we call side eye! Desigual served up some serious makeup game in the form of bold, red, winged shadow created with MAC Cosmetics Chromaline in Basic Red. (Photo via Victor VIRGILE/Gamma-Rapho via Getty)

10. Smokey Shade: La Perla’s smudgy eyes were more firey than smokey thanks to Maybelline’s Color Sensational The Loaded Bolds lipstick in Midnight Merlot topped with the shimmering plum shade from 24K Nudes Eyeshadow Palette. We dig it. (Photo via Victor VIRGILE/Gamma-Rapho via Getty)

12. Silky Skirts: A concert tee and studded choker got a ladylike update with silky red bottoms and patent boots. And a Gucci bag, natch. (Photo via Christian Vierig/Getty)

13. Bright Bags: Nothing says “I’ve got my life right” like being able to match your bag to the piping on your coat. Bravo, sister. (Photo via Timur Emek/Getty)

14. Matchy Matchy: Don’t be afraid to wear red on red — just let your denim jacket be the go-between. This look is layered, sporty and effortless. Yes, please. (Photo via Christian Vierig/Getty)

15. Stunning Scarves: If you’re just an all black err’ thang type of chick, fear not. Lean into the red trend with a textured scarf — bonus points for a matching lip. (Photo via Daniel Zuchnik/Getty)