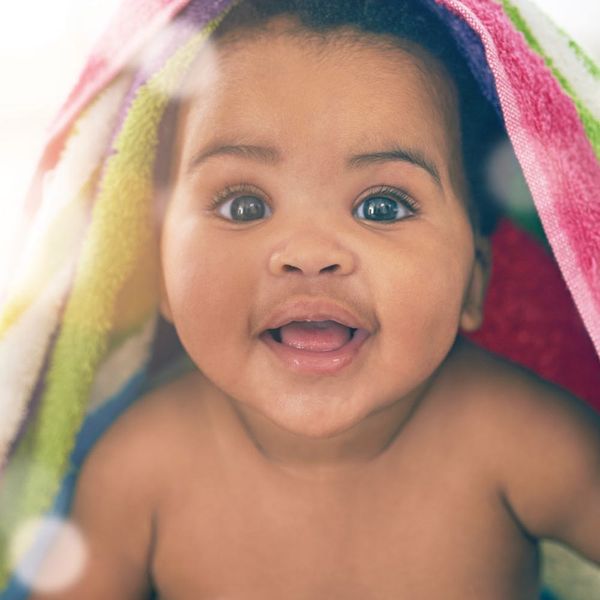 Single-syllable baby names for girls solve problems. They make great middle names, balancing out Isabella and Arabella and Evangeline. If your last name is longer and complex, keeping it simple in the first spot works. And, of course, some parents just plain fall in love with the slim, trim style of Bess and Claire, Blue and Lou. If you’re thinking short and sweet for your daughter’s name, there’s more than one approach. Scroll on for nine types of single-syllables names for girls, ranging from the modern and unexpected to timeless classics.

1. The Borrowed-from-the-Boys Name: Erika Christensen and husband Cole Maness named their daughter Shane, an Irish form of John. No word on why the couple borrowed from the boys, but they’re not the only high-profile family to do so. Reality star Audrina Partridge and fiancé Corey Bohan gave their new daughter the name Kirra Max. Celebrity babies also answer to Jude (granddaughter of Martha Stewart) and James has become a go-to middle for girls, as well as the first name of Blake Lively and Ryan Reynolds’ daughter.

2. The Preppy Surname Name: Love the idea of single-syllable names for girls, but want something less obviously Team Blue? Short surname names, like Blair and Sloane, might appeal. Quinn is a Top 100 favorite, and Reese is in the girls’ Top 200. Other names in this category include Greer, Reeve and Tate.

3. The Place Name: Many popular place names — think Brooklyn, London and Savannah — are longer. But a few intriguing options top out at one syllable, from Rome to France.

4. The Artistic Name: From colors like Teal, Blue, Mauve, Plum and Gray to musical terms like Chord and Fyfe, there’s no shortage of creative, artistic options for a child’s name. A real rarity is Fauve, a French word that refers to the artwork of Matisse and his contemporaries. It also means wild beasts, and refers to the tawny color of a lion’s coat.

5. The Nature Name: With River and Willow gone mainstream, there’s no question that nature names are very wearable in 2016. If you’re naming a daughter, everything from mainstream picks like Jade, Sage, Skye and Wren to rarities like Sea, Bay, Lake, Vale and Lark are possibilities. Eco-vintage names like May, Mae, June and Fern balance modern sensibilities with antique appeal.

6. The Virtue Name: Grace is an unassailable classic, associated with the luminous Grace Kelly, as well as Pilgrim settlers in the US. The name ranked in the US top 20 in the late nineteenth century. It’s back at number 19 again. Hope and Faith are also traditional virtue names for girls, but in 2016 they’ve been joined by new names, like True, Glow, Love and Brave. Other names feel antique, like Blythe, but are more popular today than ever before.

7. The Modern Staple: Modern staples are names that would have been rare in 1916, but feel well-established a century later. Paige and Brooke have been top 200 choices since the 1980s. Brynn, Bree, Belle and Maeve also fit in this category.

8. The Nickname Name: In our informal age, plenty of parents prefer to skip a longer name. Names like Tess, Bess, Elle, Kate, Lou and Bea might stand on their own beautifully, without the benefit of Theresa, Elizabeth, Katherine, Louise or Beatrice to back them up.

9. The Traditional Name: American Idol alum Kris Allen and wife Katy recently welcomed daughter Rose Elizabeth. Rose is one of several buttoned-up, traditional names for girls that are also short and sweet. Claire, Jane, Joan, Jeanne, Anne and Ruth are among the most classic of the single-syllable girls’ names.