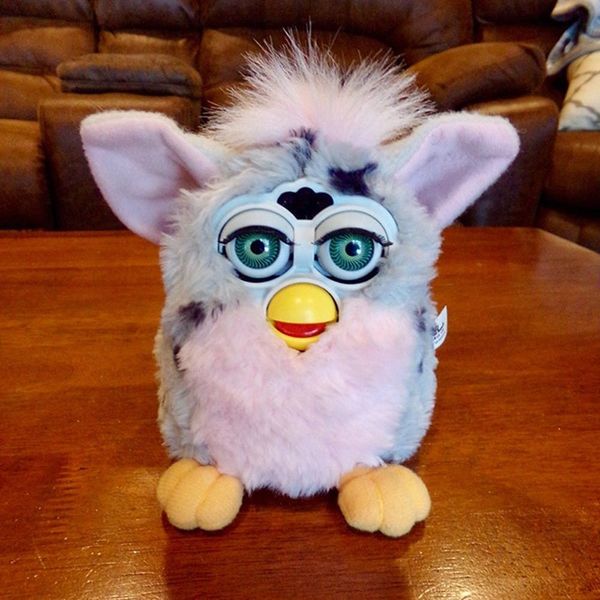 We’re living for the ’90s revival happening in fashion right now. We’re so excited about it, we’re already planning a Mean Girls mall date with our girl squad to shop for retro-inspired shimmery lip gloss, skinny sunglasses, and mini backpacks. Now that we’re officially feeling throwback vibes again, we launched an investigation into the rumor that certain ’90s products are being resold on eBay for thousands of dollars. The results are in, and you may want to call up your folks and ask them if you can clean out their attic… THE RUMORS ARE TRUE! Here are 12 popular ’90s toys that are actually selling for small fortunes in 2018.

1. Furbys: We remember the days when everyone was begging their parents for one of these half-creepy, half-cute talking fur babies. Hasbro recently released an updated version, and it’s caused something of a revived Furby craze. This is great news if you managed to hang on to one of the older versions, as toy collections are buying original ’90s Furbys in droves. In fact, a Furby just sold on eBay for over $130 and they’re still being listed for over $100 today.

2. Polly Pockets: Hands up if you remember playing with these adorable compact dollhouses! Well, if you’re able to find your old stash of ’90s Polly Pockets, you could potentially be sitting on a mini fortune. Along with selling individual Pollys for a reasonable return on investment, Polly Pocket lots (AKA a single eBay listing with multiple vintage Polly Pockets) are selling for upwards of $500.

3.Pokémon Cards: Perhaps partly due to the recent Pokémon Go craze, nostalgic fans are willing to shell out thousands of dollars to complete their card collection in 2018. For instance, if you happen to still have a mint-condition Charizard holographic card, you could realistically sell it on eBay for anywhere from $2,900 to $5,000.

4. Hot Wheels: If you grew up in the ’90s, we can almost guarantee you’ve created elaborate Hot Wheels racing tracks all around your living room to race against your friends and siblings. Luckily, these mega-popular ’90s cars are still a hit with collectors today. While models vary in value, certain vintage cars are a huge commodity on reselling websites. Take a look in your collection for any Treasure Hunt cars (a 1995 Treasure Hunt Camaro sold for $1,500) and if you find a Rolls-Royce Silver Shadow car, save it! It could be worth up to $2,380.

5.Beanie Babies: While we all thought Beanie Babies were the toy investment that would make us millionaires as adults, it’s sadly very difficult to make a profit from selling these fun plushes online. That being said, there are a few Beanie Babies out there that can earn you a pretty penny. A royal blue elephant named Peanut sold for $1,725 earlier this year, and sellers are still listing them for upwards of $700 today. If you don’t have little Peanut in your collection, keep an eye out for Beanie Babies with manufacturer defects as collectors seem to be willing to shell out a lot of dough for these on eBay.

6. Harry Potter Books: Listen up, Potterheads. While there have been a bazillion reprints of the popular Harry Potter franchise (not to mention more than a few after-the-fact additions to the series), if you managed to hold on to an original first edition of the first novel, you could be sitting on a sizeable profit. There were only 500 copies printed of the first edition of Harry Potter and the Philosopher’s Stone in 1998 (you can tell it’s this version because the author is listed as Joanne Rowling on the title page). While it’s pretty unlikely you’re in the possession of this elusive version, if you do end up finding one under your childhood bed, you could be looking at a $50,000 payday.

7. Black Diamond Disney VHS Tapes: Growing up in the ’90s was practically synonymous with watching and re-watching Disney VHS tapes. While most VHS tapes are practically worthless today, there are a few that would be worth searching your old stash for — particularly, the Black Diamond version of Disney films. Unlike regular Disney VHS tapes, these versions feature a black diamond on the spine with Walt Disney’s signature located inside the diamond. A recent eBay lot of Cinderella, The Little Mermaid, Beauty and the Beast, and Dumbo Black Diamond editions recently sold on eBay for over $1,900, and single Black Diamond movies are still listed for around $140.

8. Magic: The Gathering Cards: If you and your friends were constantly being reprimanded for playing this intense card game during class, you’ll probably be happy to know that some Magic: The Gathering cards are actually worth a pretty penny today. For instance, the Black Lotus card is of particular value; a recent eBay listing sold one for $7,800. Guess it’s time to dust off your collection!

9. ’90s Barbies: Barbie has been through several radical transformations throughout the years (we’re particularly fond of Barbie’s recent improvements to promote diverse bodies and women’s empowerment). During the ’90s, Mattel was all about incorporating fun accessories in their Barbie doll kits, including memorable add-ons like 3D jewel stickers and bubble fairy wings. Perhaps one of the most popular versions was the 1991 Totally Hair Barbie, which came with styling gel and featured ultra-long hair to braid, style, and perhaps even cut (sorry, mom). Recently, one of these dolls sold on eBay for a whopping $110, but if you’ve got both Totally Hair Barbie and Totally Hair Ken, you’re looking at approximately $425.

10.Tamagotchi: Tamagotchi was the height of ’90s fad toys. I mean, who wouldn’t want a keychain pet that you have to feed, love, and clean up after? This digital toy was first released in Japan, but it didn’t take long before it expanded into the global market. It’s good news if you want to resell yours online, too — a 1996 original Bandai Tamagotchi recently sold for nearly $3,000.

11. My Little Ponies: Brushing these colorful pony manes was hours of fun in the ’90s, and today’s collectors are still obsessed with My Little Ponies. While individual ponies and pony families (yes, some ponies came in color-coordinating families) can sell for around $60, big lots of ’80s and ’90s versions are consistently selling for more than $500.

12. Pogs: Designed after the popular Hawaiian game of “Milk Caps,” the game of Pogs hit peak popularity during the mid-1990s. While you probably won’t see too many kids trying to pick up Pogs with a slammer in 2018, collectors are still interested in this easy-to-play game. Pog lots sell on eBay for more than $100, with collections like the American State Maps and Looney Tunes selling for even more.

Did you ever play with any of these fun ’90s toys? Tweet us by mentioning @BritandCo.

Ashley Macey
Ashley Macey is a lifestyle freelance writer who loves all things fitness, wellness, and creativity. When she's not exploring her home in the Pacific Northwest with her dog Max, you'll probably find her curled up with a good book and some hot tea. Follow her daily jaunts on Twitter.
90s
Creativity
90s Online Shopping Shopping
More From Creativity