Amazon Intros a Whole New Way for You to Watch TV 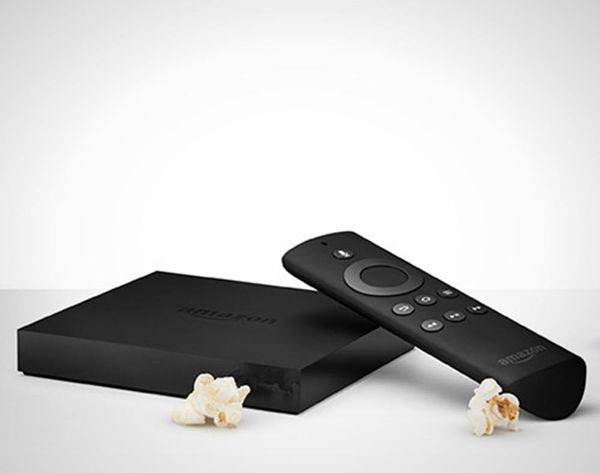 Apple TV and Roku have a new frenemy in town. It’s been a long time coming and a whole lotta whispers on the web (call us gossips, but we love a good tech rumor) but Amazon finally unveiled their own streaming media device this AM, Amazon Fire TV. Ta-dah:

The little black box will compete with your current streamer, like Apple TV and Roku — or, if you’re old school in your New Girl-watching ways, maybe even your cable box. From the outside it may look similar to the competition, but Amazon claims that they’ve had their eyes on the others (you know, like, selling them on their own site) for so long that they figured out how to make theirs better. Big words, but they have some impressive specs to back up those claims.

Amazon Fire TV has a “best in class”-according-to-Amazon quad-core processor, 2GB of memory (two to four times more than what else is out there) and dual-band WiFi that boasts three times the speed of the other guys. It is the only device to feature Dolby Digital Plus surround sound and a remote that lets you use voice search to call up what you want to watch next. They also boast serious gaming capabilities too with over 100 games supported now and thousands more coming soon. A dedicated controller, the Fire Game Controller, sells for $40.

App-wise, Fire TV runs Netflix, Pandora, Hulu Plus, Crackle, Showtime Anytime, YouTube, Instant Video, its own original content from Amazon Studios and more. They launch with a new photo app that plugs into CloudDrive to let you upload your smartphone pics onto your TV. The only thing really bumming us out/encouraging us to keep our Roku is that it does not support HBO Go, so if you’re looking to catch up on Looking* you’re out of luck. (*Also see: reruns of SATC.)

Amazon Fire TV sells for $99, same as Apple TV and Roku 3. Other Roku models can go as low as $50 and Chromecast rings in as the cheapest option at $35. Although a lot of the viewing pleasure on all of these devices requires monthly subscriptions, you’d probably find that memberships at Club Hulu and Netflix are cheaper than your monthly cable bill. You can already order one (where else) on Amazon. And you better believe it’s eligible for Prime shipping.