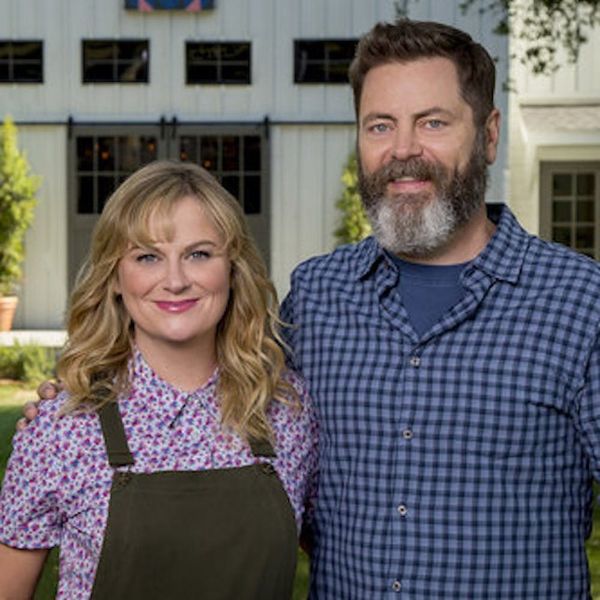 Amy Poehler and Nick Offerman’s new crafting competition series, Making It, debuts tonight, July 31, and to celebrate, the stars talked with Variety about what it was like to reunite for another show after costarring on Parks and Recreation for six years.

“It was so nice to just be on a set with him again and spend time with him,” Poehler told Variety. “Nick and I kind of share a similar giddiness for new things, and I’m not as bubbly as Leslie [Knope] and he’s not as grouchy as Ron [Swanson] — we kind of meet in the middle — so it was just great to walk around and see interesting things being made and not have to memorize lines.”

The new NBC reality show will feature contestants from around the country competing in various DIY challenges, from creating terrariums and wedding cake toppers to building forts and redesigning rooms. The results will be judged by Barney’s New York creative ambassador Simon Doonan and Etsy trend expert Dayna Isom Johnson. Poehler and Offerman will act as hosts.

“Most of the show we’re just like, ‘Wow, good luck, we’re glad we’re not judging’ — like ‘Good luck, you guys!'” Poehler joked. “It’s so fun to not judge because you can help the contestants, you can root for them. Most of the episodes we did, I just kept trying to, behind the scenes, convince people that no one should go home. We left that work to somebody else.”

Even with the eliminations, though, the show is very positive and encouraging. Poehler noted that “there’s not any yelling — like zero yelling. No one stabs each other in the back, unless they accidentally bump into each other with shears or something.”

“There’s a sense of camaraderie. It’s the kind of show you can watch with your kids and be rooting for people and also be inspired,” she continued. “I don’t do well with competition shows that stress me out, there’s enough things to be anxious about. It will make you cry, but in a really good satisfying way, after you’ve had a glass or two of wine, and don’t we want that from our TV?”

Are you excited to check out a feel-good show like Making It? Let us know @BritandCo!