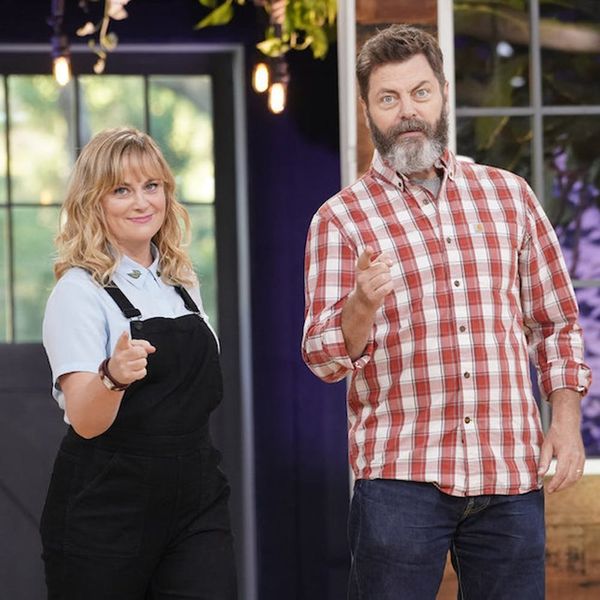 Get excited: The new crafting TV show with Amy Poehler and Nick Offerman is finally debuting on Tuesday, July 31. Joining beloved hosts and executive producers Poehler and Offerman are judges Dayna Isom Johnson, Etsy’s trend expert, and Simon Doonan, creative ambassador for Barneys New York. The first of season of Making It is six episodes of pure DIY bliss. And the show’s Instagram account (@nbcmakingit) is already providing some major inspiration, with sneak peeks at creative contestants like Jemma Olson, a grandmother to 16 grandkids, and blogger Amber Kemp-Gerstel, who left her career as a psychologist to focus on her crafting blog Damask Love.

Making It executive producer Nicolle Yaron and producer Erin Comerford Rubin gave us the inside scoop on how the crafting reality show of our dreams was made in our Women in TV series, a collection of interviews with female producers, writers, and crew members who prove that being in the entertainment industry isn’t just for boys.

Nicolle Yaron: I’m an executive producer so I create, develop, and/or produce unscripted television shows. “Unscripted” is a big umbrella that covers everything from game shows to docuseries, so anything from Alaskan Bush People to Real Housewives. I like to specialize in shows that celebrate talented people of all types, have heart, and make you laugh.

Erin Comerford Rubin: On Making It, I’m a producer. That means different things on different shows, but this time, the producers were focused on the story. For each episode, I tracked what was happening with the makers (our contestants), interviewed them along the way, and made sure the hosts and judges were up to speed. Then once we finished filming, I worked with the editors to put the episodes together.

NY: Every day is different. The most fun days are when we’re in production, meaning the days we’re actually shooting a show, but there are also days of researching and working alone and days filled with back-to-back calls and meetings. There’s a surprising amount of time spent making documents and spreadsheets, but you also have days where you get to read books and magazines, listen to music and podcasts, and watch movies, TV, and YouTube, and call it work.

ECR: One thing I really like about production is that every day is different. When I’m in post, working with the editors, it’s often 10am to 7pm. But on shoot days, I had early call times. Luckily, we were shooting at a beautiful location, so getting [to see] the sunrise on the drive to set made the early call times a little easier. Once there, we would go over the schedule so we all knew what the day looked like, and then it was pretty much nonstop, watching the makers as they worked, grabbing quick interviews to learn about their projects and how they were feeling, and working with the hosts and judges as they visited the makers.

NY: I owe my career to a spur-of-the-moment decision to visit a friend one summer. While there, I met Carson Daly. Six months after meeting him, he was starting Last Call with Carson Daly and remembered me and asked the producers to reach out. That’s why the advice I give people is to say yes to everything you can. You never know who you’re going to meet and where it might lead.

ECR: A friend of a friend worked at a small documentary company and they were looking for a production assistant (basically someone to run errands). It turned out that she and I both went to the same college (go, Badgers!), so she called me in for an interview. Pretty straightforward, but it turned out to be a great place to start since a smaller company meant that I could learn a lot and be more involved with different parts of the production.

NY: How hard it is to make things look easy and how many talented people work behind the scenes on anything you watch.

ECR: I think something that often surprises people is the amount of footage we need to shoot to make a show. For instance, just one challenge on Making It could take 12 hours to complete. We had several cameras covering eight makers for that entire time. Then we film a three-hour challenge, plus interviews, judging, and eliminations. You end up with dozens of hours of footage that needs to be cut down to about 42 minutes of show time.

B+C: What do you love about working in TV?

NY: From the Oscars to the Emmys, to The Voice, I’ve been very lucky to be there for the moment when people’s dreams literally come true. That feeling is really special, but mostly I love the people, the process, and the collaboration. I love seeing the transformation from a thought in someone’s head to something millions of people see in their living rooms, but most of all I love telling stories and making TV that makes people feel good, like Making It.

ECR: My top two would be the people and learning new things every show. I realize that’s a super cheesy answer, but it’s true. With every new show, I get to meet new people and usually find more folks that I want to work with again — and many of my good friends are people that I’ve met at work. I feel so lucky that I get to go to work with people I like to be around. As a freelancer, I jump from show to show, so I get to learn everything from how to get crafty, to the history of the Knights Templar, to how to cook gooseneck barnacles.

B+C: Are there any fun behind-the-scenes moments from the first season that you can share?

NY: There are so many. We’ll put some of them into outtake videos we’ll post with each episode, but a fun secret one is that Nick and Amy and the lovely folks from Parks and Recreation lent us a few special items from Pawnee we hid throughout the set.

ECR: The energy on set was definitely different — and more fun — than other competition shows I’ve worked on. It was really positive and not catty. The makers are all so talented. It was about the love of making things and not about being competitive and talking bad about each other. I loved seeing Amy and Nick check out all of the projects. Amy is a crafting novice, while Nick is a master woodworker, so they brought very different perspectives.

B+C: What was it like working with Amy Poehler and Nick Offerman on a crafting show?

NY: The stage manager kicked me off set once because I couldn’t stop laughing, but I also learned so much from them about life and how to be a better human. Hopefully, that’s what watching Making It will be like for everyone at home too.

ECR: It was fantastic and really funny, of course! I love Parks and Rec, so I was absolutely giddy that they were together in a show again, and then being able to work on it? I’m such a big fan of both of them, and I love making things, so this was the perfect show for me. They are both so silly and witty, and their interviews were always hilarious. But on top of it, they’re also really nice, genuine people. They always made sure to spend time with each of the makers and really listened to what they had to say.

NY: I think you’re starting to see the changes on screen as more shows created or produced by women become successful. It’s definitely a different landscape than it was just a few years ago and there are still challenges, but there’s a feeling of increased cooperation that makes me optimistic and excited for things to come.

ECR: Slowly. But it’s happening. I’ve been lucky enough to work with a lot of women executives, producers, and writers. Hopefully, we’ll start seeing more balance in the crews, audio, directing, and [those] running the cameras. I’ve also experienced my share of misogyny, but much more in the past than recently. Making It is actually one of the productions that I saw making a conscious effort to hire a diverse crew, and I hope that’s something we see more of in the future.

(Making It photos via Paul Drinkwater/NBC; Judges photo via Chris Haston/NBC; Making It logo via NBC)