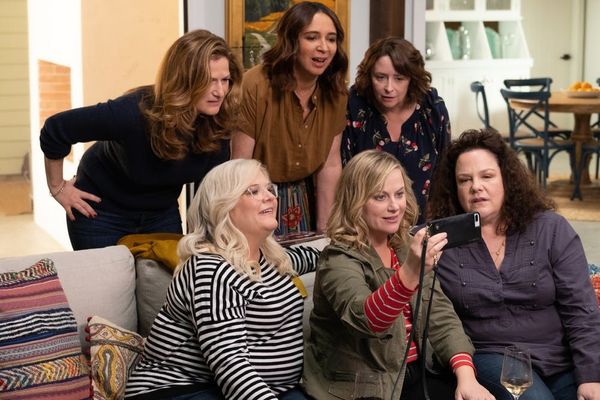 Circle May 10 on your calendar and stock up on rosé, because you and your BFFs are going to need a girls’ night in to watch Amy Poehler’s directorial debut, Wine Country. The Netflix film stars Poehler, Ana Gasteyer, Maya Rudolph, Tina Fey, Rachel Dratch, Paula Pell, and Emily Spivey, and from the looks of this first trailer, it’s basically the movie of our dreams. (Seriously, though, has Poehler been spying on our collective subconscious?)

The film revolves around a girls’ getaway in — you guessed it — wine country. Rebecca (Dratch) is celebrating her 50th birthday, so Abby (Poehler) plans a weekend trip with their longtime besties, Catherine (Gasteyer), Naomi (Rudolph), Val (Pell), and Jenny (Spivey). Although they’re all excited to chill out and let loose, their plans don’t go the way they expect — especially when past tensions begin to surface.

“Celebrating with a girls’ weekend, eh?” Fey, in character as a local in wine country, asks the women. “Just remember, guys: Whatever gets said, it’s probably what the person has always felt, and the alcohol just let it out.”

The alcohol does indeed lead to some difficult discussions, but it also leads to some hilarious antics — like a bar sing-along to “Eternal Flame” and a drunken serenade by Naomi.

“These women, I have known for 20-plus years,” Abby says. “And yeah, sometimes I want to tell this one to f*ck off. That’s what intimacy looks like!”

If the story feels authentic, that’s because it was inspired by a trip the women actually took together to celebrate Dratch’s 50th birthday. “In real life, the trip to Napa and Sonoma County went according to plan, but in the movie, things go bonkers,” Dratch told The Hollywood Reporter. “We exaggerated some of the Northern California characters and occurrences, none of which I am permitted to share at this time!”

RELATED: 4 Women Who Are Leading the Way in the Wine Industry