Andy Samberg Reveals Some of the Rejected Golden Globes Jokes 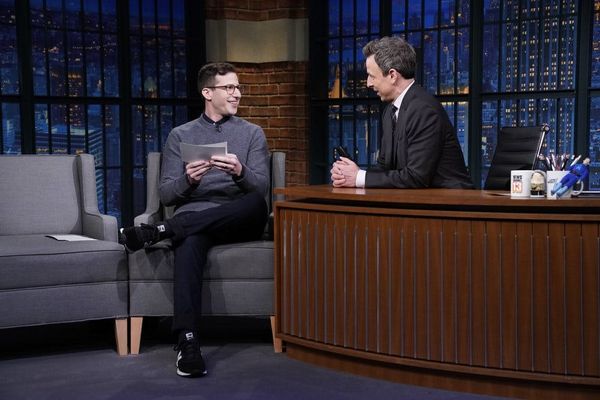 As the hosts of the 2019 Golden Globes on Sunday, January 6, Andy Samberg and Sandra Oh delivered a wholesome performance that kept the show rolling on a positive note. As is the case with most hosts, though, they had a lot of (very funny!) material they didn’t end up using. Fortunately for us, Samberg decided to share a few of the rejected jokes on Late Night With Seth Meyers on Wednesday, January 9.

The crowd seemed happy to oblige, so Samberg rattled off a few of his favorite gems, including a quip about one of 2018’s biggest blockbusters. “Crazy Rich Asians is up for two awards,” he began. “And crazy rich white people are up for the remaining 200.” Boom!

He also had a couple about Alfonso Cuaron’s Roma. “Guys, do yourself a favor: Go out and watch this one on the biggest phone you can find,” he said, pausing for laughs and then explaining that the film is on Netflix. “Roma is such an emotional experience. When it was over, I literally sat there and cried for a full five seconds before Netflix started blasting a new movie where Kurt Russell plays Santa Claus.”

Samberg then mentioned the movie BlacKkKlansman, which, “judging by the upper and lowercase lettering in the title, is also a Wi-Fi password.” (John Mulaney wrote that one.)

On the TV side, he poked fun at The Good Place, “a philosophical afterlife comedy that asks complicated questions like, ‘Can Ted Danson still get it?’ Not that complicated — the answer is yes.”

The list of rejected jokes went on for a while, with quips about The Marvelous Mrs. Maisel, Homecoming, Green Book, and A Star IsBorn, the latter of which gave us this gem: “Netflix beat out Amazon tonight as the most nominated streaming service, while the best streaming scene was Bradley Cooper wetting himself in A Star Is Born.”

What do you think about the Golden Globes jokes that didn’t make the cut? Let us know @BritandCo!

Desiree O
Desirée O is a ‘Professional Bohemian’ who loves anything and everything related to the arts, entertainment, and pop culture. She ADORES being a ‘Newsy’ for Brit + Co, covering all of the latest tidbits of awesomeness that you want to read about. When she’s not writing, she’s either making messy art, going on long adventurous walks with her camera, or poking around over at bohemianizm (http://www.bohemianizm.com/). You can find out about Desirée O and her work at http://DesireeO.com/ or follow her on Twitter @DesireeO.
Awards Shows
TV
Awards Shows Golden Globes TV