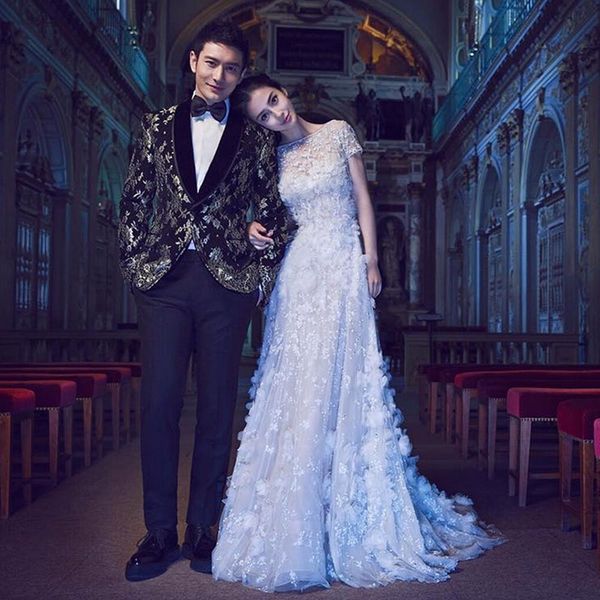 For the average couple, a wedding typically costs around $29,000. But Angela Yeung (AKA Angelababy) and her now husband (and fellow actor) Huang Xiaoming are not most people. The Chinese actress, known as the “Kim Kardashian of China,” spared no expense to make her wedding one of the grandest ceremonies that ever was. To put things in perspective, Kimye’s wedding cost $12 million, Yeung and Xiaoming’s cost $31 million.

What ultra-luxe details racked this wedding bill up so high? According to Forbes, “The elaborate ceremony—which was live-streamed online—boasted a holographic castle, not to mention a ten-foot cake shaped like a carousel (which reportedly took a month to make). Each attendee left the lavish event with a bagful of gifts, including a mobile phone.” There were 2,000 guests in attendance, so that’s A LOT of cell phones.

The 26-year-old wore a custom Dior Gown (pictured in the black and white photo) that took a whopping five months to create. The dress includes 115 feet of ivory satin organza, 165 feet of tulle and a 10-foot-long train.

Oh, and her ring? That five-carat pear-shaped diamond (with another half a carat of diamonds around it) is valued at $1.5 million, which strange as it sounds, might just be one of the more “affordable” elements of this mega glam affair.

What’s the fanciest wedding you’ve spotted recently? Share with us in the comments below.