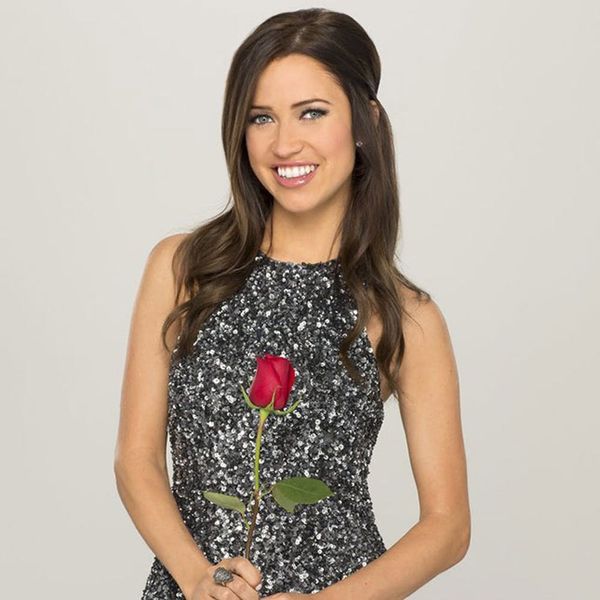 On this, the night of The Bachelorette finale, as Kaitlyn Bristowe chose (spoiler) ugh, totally the wrong guy. I feel the need to explain my own misguided but earnest love of this show. I have a good excuse for why I started watching The Bachelor/ette — work. As an intern for Entertainment Weekly back in 2008, it was necessary that I be up on my reality TV so I dutifully was. I have an even better excuse for why I kept watching — friends. Buds I would have deemed too high brow for a basic cable show about the quest for love (book publishers, social workers, AIDS researchers) organized weekly viewings around a TV and a pizza in a rotating cast of Brooklyn apartments.

When I moved from NY to SF to work for Brit + Co last January, I left my girls and our Monday ritual behind. In the few seasons I took off, the Bachelor/ette(s) went to an island to find love and I to Silicon Valley to search for the same thing in bars and on dating apps. Tuning back in to the show this season to follow Kaitlyn, I saw each episode, every date and all the mascara-tinged tears in a completely new light. Instead of thinking it was “so ridiculous” and “totally made up,” I was pretty humbled by the realness I saw beyond each rose ceremony. Compared to my last year and a half dating about as many men as Kaitlyn gets to whittle down by episode two or three, I was bummed to admit that the guys on the show were better at dating than 90% of the dudes I had grabbed a drink with over the last 18 months and, at times, they were even better than I was at it.

After some deep introspection and DVRing, here are a few things Bachelorette contestants could actually teach us regulars about dating. You might not have Chris Harrison to help you find The One, but maybe my words of television-taught wisdom can guide you on the path to meaningful like like.

1. Be There for the Right Reasons: According to a May study, a crazy 42% of Tinder users are actually in a relationship. GUYS, WTF! Why join a dating app if you’re not actually there to date? I am interested in dating and I don’t even want to use dating apps. What kind of free time do you monsters have?? Is it really the swipe function that’s so intoxicating? If so, let me recommend downloading BuzzFeed’s Cute or Not app which offers the same satisfaction for a fraction of the unmet expectations.

2. Ask Questions: Maybe it’s because the contestants are aware of the cameras rolling. Maybe it’s that they’re well-prepped by producers before each date. Whatever it is, (it’s probably both of those things) it’s refreshing to watch people ask each other questions over dinner and drinks. You know, to like, get to know each other and stuff. When talking to women about what makes a good vs bad date, more often than not a complaint they express to me about their men they’re dating (and, to be fair, I’ve heard this the other way and in same-sex relationships as well) is that the guy just didn’t ask them any questions. Or they did on dates 1 + 2 and then got lazy by date 3. We’ve all witnessed someone (please tell me you saw this story of a woman live tweeting someone’s awful date) sharing their life story without asking nary a Q about their date. Don’t be that guy/girl.

3. Share Your Story: Speaking of sharing life stories, you should do that. In moderation. For a show people like to dismiss as “fake,” being phony on The Bachelor/ette is actually one of the worst offenses that will get you called out by no less than three guys and possibly even Chris H himself. I know some of you might be grossed out by what I’m about to say, but these contestants know their personal brand and it’s easy to see it when they’re telling their potential boo about themselves. Being able to articulate your path and what made you who you are today makes you seem confident and real. Even if your teeth are unnaturally white.

4. Go on Fun Dates: I AM GUILTY OF NOT ABIDING BY THIS RULE. I get it; it’s tough. If you’ve ever been catfished by an OKCupider who doesn’t really look like their photos (cough), it’s difficult to commit to much more than a happy hour drink en route to emergency escape plans. If you’re feeing good about a suitor, play producer and plan a date worth going on. EVEN if that date is just to a bar, make it a favorite, a secret spot that inspires a great story — at leeeast something with Big Buck Hunter in case you run out of things to talk about. If this works out, you’ll have all your life to crack open a beer, order Thai and stay in so try jumpstarting your honeymoon period with something more than $2 PBR.

5. Wear a Gown/Suit and Tie: While this is one of the silliest things about the show — especially The Bachelor, where this visual phenom is multiplied by David’s Bridal dresses for days — there is something legitimately nice about seeing someone wearing their Sunday best on a Saturday date. I’ve shown up for a date wearing a dress to be greeted by a 30-something man wearing (sigh) a hoodie, graphic tee and flip flops. I’m no snob, but take this season of The Bachelorette as proof that a first impression (specifically, a First Impression Rose) can mean something real.

6. Know You’re Not That Deep: There’s an area on OKCupid that suggests “You should message me if…” One of my favorite things I’ve ever seen in that little box is from someone who answered: “that there’s something on your profile that you’re a little bit embarrassed about.”

Taking oneself too seriously is the opposite of sexy. Just ask the guy who got sent home without the comfort of a rose ceremony for being “too deep.” That’s not the ‘tude America falls in love with, Ian.

7. If You Don’t Want to Date Someone, Let Them Know: Crazy, right?! This one will seem obvious to adult humans out there, but probably not adult humans who date regularly. No, you might not have the opportunity to line up all of your suitors in a mansion like they’re in a v fancy, possibly haunted elementary school chorus, guide out the ones you’re not willing to spend a night in a fantasy suite with and let them cry it out in a limo. What you do have though, is the opportunity to call, text, email, face time with a person you’re dating or have gone on dates with to let them know where you’re at.

Bonus: “What I felt for you was greater than a moment.” – Nick, you win for best response to an ill-timed breakup.

Lisa Raphael
In her past professional lives, Lisa has served the masses as the Editorial Director at Brit + Co, Bieber Whisperer at J-14, Golden Girls Fan Club Prez at Lifetime and Talk Show Host Understudy to Katie Couric. Now, she's taking on the sports world at The Relish, teaching Hairography 101 in her spare time and will forever be trying to fill the hole Zayn Malik left in her heart.
love
Home News
love
More From Home News