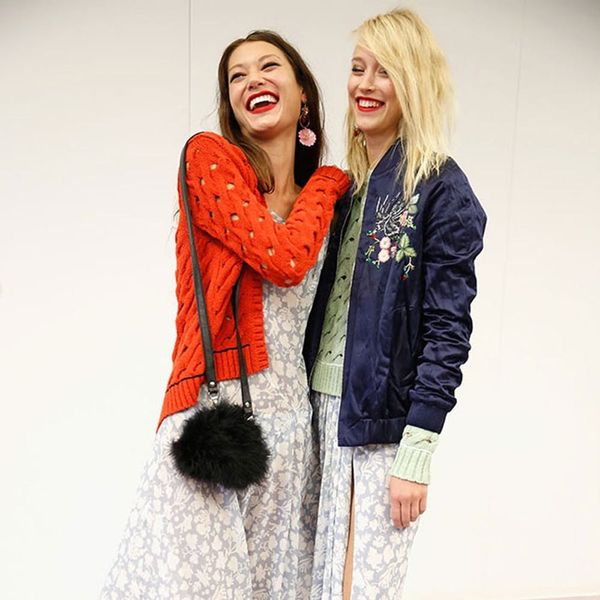 London Fashion Week came and went in the blink of an eye — starting last Friday, just a day after New York Fashion Week wrapped, and ending earlier this week on Tuesday — but we’re still swooning over the beauty trends that emerged from the festivities across the pond. There’s just something about British girls that we can’t get enough of, maybe because they seem to switch between hair + makeup looks that are both unapologetically quirky and fiercely feminine in the blink of an eye and own it every time. So, the beauty trends we spotted on the London catwalks serve as perfect inspiration for when you want to switch up your day to day routines. Whether you want to be a lot more feminine, a little bolder or totally cheeky, here are seven new British girl beauty trends to try.

1. Fire Engine Red Lips at Felder Felder: Red lips are classic but took on an edgy, new vibe at the Felder Felder show. We noticed super toned-down makeup — almost like no makeup makeup — but it was paired with a bold red lip, which then became the focus on the model’s face. (Photo via Tristan Fewings/Getty)

3. Matte Coral-Reds at Mimpikita: The super matte, orange-y red puckers shown at Mimpikita were definitely on display while still being balanced against the white heavy-winged liner on the models, which gave off a cool retro vibe. (Photo via John Phillips/Getty)

4. Deep + Sleek at Alexander Lewis: The models strutting their stuff in this show had a slightly futuristic vibe about them — in a very cool way. The super sleek, straight hair flowed to the right side and was accentuated by a super deep side part that started near the eyebrow arch — that’s how deep it was. (Photo via Ian Gavan/Getty)

5. Slicked-to-the-Side Waves at Mary Katrantzou: Greasy roots are so chic with this oiled-up look that casually cascades into loose, natural waves. (Photo via @marykatrantzou)

5. Combed Over + Pulled Back at Margaret Howell: We love this minimalist hair style: a simple, deep side part combed alllll the way over with the rest of the hair was pulled back — not too tight, not too loose, not too slick, not too casual. (Photo via Tristan Fewings/Getty)

6. #WokeUpLikeThis Realness at Preen: Baby hair, flyaways and all were on full display at the Preen show. It looks like she rolled out of bed, mayyyybe brushed her hair with her fingers and then effortlessly strutted her stuff on the runway. (Photo via Stuart C. Wilson/Getty)

7. Slept-In Styles at Christopher Kane: You know when you accidentally fall asleep in a ponytail? It looks like that’s exactly what Christopher Kane was going for during his LFW show: The models’ hair was slightly undone and there were pieces that fell, making it really embody the early morning hair vibe. (Photo via @christopherkane)

8. Face Wash-Fresh at Daniel Hershesons: The models at this show looked like they had just finished washing their faces — cloth headbands and all (to hold their hair back, duh!). There was slight volume in the ponytails, though, but they weren’t super smooth. (Photo via @adrian_at_hershesons)

9. Under-the-Scarf Hair at Anya Hindmarch: It’s so annoying when you throw on a jacket and your hair gets stuck inside the jacket, right? Somehow, Anya Hindmarch made this look totally intentional and cool on the runway with sleek, low ponytails that were half under a patterned scarf. (Photo via @anyahindmarch)

10. Next-Level Clip Placement at MIUNIKU: We looove this look — it’s so simple while still being super unique and edgy. Also, anyone can replicate this one at home. A shiny, gold clip pulled back sleek hair on the left side, while the right side just hung and did its thing. The perfect blend of trying without trying too hard. (Photo via @MIUNIKU)

11. Tucked-In Tresses at Molly Goddard: Molly Goddard showed off the sheerness of her dresses in a smart way: by having models’ hair tucked into them, providing a peek at their locks through the dresses. Genius. (Photo via @robsongirlll)

12. Glossy Violet Lips at Emilio De La Morena: Shiny violet lips popped on the runway for this show. We love this color — it’s springy and vibrant (but still moody enough to wear nr) while still being wearable off the runway. (Photo via Anthony Harvey/Getty)

13. Ombre Orange Kissers at FAD: A super cool ombre orange lip was spotted at this show: slightly darker on the outside corners (think: pinky-coral) and tangerine orange on the middle of the lips gave a multi-dimensional vibe to this look. (Photo via Ian Gavan/Getty)

14. Vampy, Black and Blue Lips at Toga: These models looked RAD. Super minimalist makeup paired with intense lips and truly unique clothing made for a really cool look overall. The bottom lip was a deep (like, super deep) purpley-black and the top was a blue — a fun take on black and blue. (Photo via Tristan Fewings/Getty)

15. Heavy Black Liner at Issa: The contrast of super pretty clothing with slightly gothic black, bottom-heavy liner was really fun. The models’ makeup was pretty neutral, too, with flushed cheeks + lips, so the black liner made you look twice. (Photo via Gareth Cattermole/Getty)

16. Smudgey + Grungey at GILES: While the rest of the makeup was fresh and dewy, models’ eyes appeared like they hadn’t taken off their eye makeup from the night before — in a really good way. (Photo via Ian Gavan/Getty)

18. Fresh-Facedat Edeline Lee: A super fresh look was on display with super sheer, peachy lids, a barely-there sheen on the lips and flawless skin made this bare-faced look a knockout without trying too hard. (Photo via @edelinelee)

19. Highlighted High Facial Points at Paul Smith: Minimalism was key at this show, but the models did rock some slight highlighter on the high points of their face (nose, cupid’s bow, chin) which gave them an airbrushed glow. (Photo via @paulsmithdesign)

20. Super Dewy Skin at LâAmitie: Dewy, healthy-looking skin was everything at this show. The models looked like they had just gotten life-changing facials; that’s how amazing their skin looked. (Photo via Nicky J Sims/Getty)

What was your fave look from London Fashion Week? Share your thoughts in the comments below.