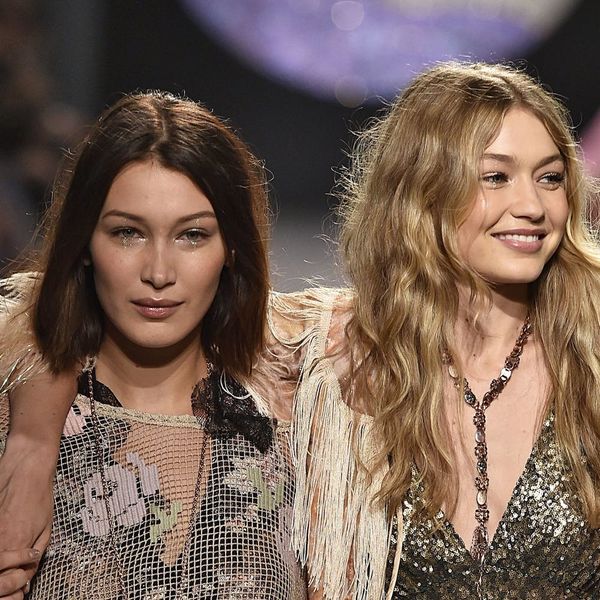 Having walked the runway for some of the biggest names in the biz, Gigi Hadid is undoubtedly a pro. But even the best models aren’t exempt from a mishap or two — we’re STILL reeling over the tumble Naomi Campbell’s took while strutting her stuff for Vivienne Westwood in the ’90s! Hadid faced her own runway snafu this week when she lost one of her shoes mid-walk at Anna Sui, but luckily her sister, Bella Hadid, who was walking in the same show, was there to come to her rescue.

The Hadid sisters were on the catwalk at the Anna Sui spring/summer 2018 show during New York Fashion Week when calamity struck. Mere seconds after taking the stage in a gold flowing gown with a fringe-and-maribou coat inspired by an earlier era, Gigi, 22, was suddenly down one heel.

She continued on down the runway as best as she could while balancing on the ball of her foot to even herself out: an impressive feat, to be sure.

For her second pass down the runway, however, she had a little help from Bella, 20, who came to her sister’s aid with a clasped hand and an arm draped around her shoulder as they walked side-by-side to the Beatles “Lucy in the Sky With Diamonds.”

If the Vogue covergirl was embarrassed, she certainly didn’t show it: The two beamed the entire way, proving that they’re total pros even when things go awry.

We love that Gigi was able to lean on Bella, saving her from a potentially painful and uncomfortable stumble, and it’s further proof that no one will save you from a wardrobe malfunction quite like your sister.

What is your favorite part about having a sister? Hit us up @BritandCo.

Arielle Tschinkel
Arielle Tschinkel is a pop culture junkie who went to NYU because the Olsen twins went to NYU (really). She is a freelance writer whose work has also been featured on HelloGiggles, Refinery29, SheKnows, Bustle, Hollywood.com, and many others; and she's living her dream one Britney Spears GIF at a time. Follow her on Twitter @mrstschinkel or visit her website at arielletschinkel.com.
Family
Style News
Family Fashion Week New York Fashion Week NYFW
More From Style News