The 14 Coolest, Most Extravagant Celeb Engagement Rings We’ve Ever Seen 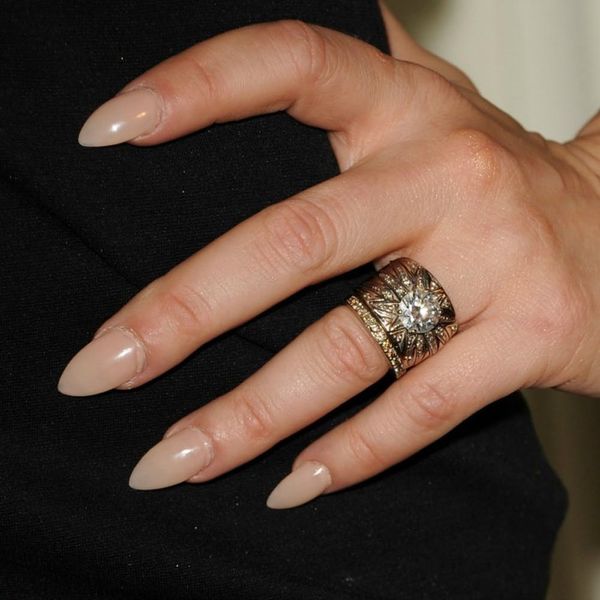 Choosing the perfect engagement ring is no easy feat. You want something that is timeless but also fashionable, special but not trendy and, of course, in your budget. The fact that there are so many options — for the ring, not the S.O. — makes the job of selecting just the right bauble even more difficult. There are vintage styles and unconventional diamond options (and non-diamond rings, for that matter), and that doesn’t even include all the cool gems. This stuff can be overwhelming. Our motto? Go big or go home. What’s the harm in going a little off book (and budget) with an omg-worthy, double-take-inducing, over-the-top sparkler? For a look that requires its own security team, we turn to none other than our fave celebs (because who else could afford this life?) for a bit of extravagant inspo. If you’re looking for a distraction or just want to daydream, check out these 14 totally unique, ultra-cool celebrity engagement rings that are sure to make you swoon.

1. Nikki Reed: It was a match made in paranormal heaven when Vampire Diaries actor Ian Somerhalder asked Twilight alum Nikki Reed to marry him in 2015. The ring Ian chose was a vintage-inspired circlet in the shape of a flower, featuring a sizeable center stone and surrounding half carat diamonds. Sign us up for some of that bling. (Photo via C. Flanigan/Getty)

3. Olivia Wilde: The beauty of going vintage with an engagement ring is that you’re getting something unique that has its own rich history. Jason Sudeikis and Olivia Wilde spent some time in Paris, the city of love, which influenced this stunner from 1921. The story of the art deco piece gets even more romantic. Olivia’s fiancé says the emeralds remind him of her eyes. (Photo via Jon Kopaloff/Getty)

4. Margot Robbie: Margot Robbie may or may not be engaged to her British beau Tom Ackerley, but what we do know is that he gave her a ring fit for a princess. The bauble is a next-level pink diamond circle stone with surrounding traditional diamonds. For you girly girls, this one’s #goals. (Photo via JB Lacroix/Getty)

5. Kim Kardashian: Kanye West gave Kim K. a simple ring for a simple girl. Kinda. The 15-carat diamond stunner rings in at an estimated $8 million. The ring was a collaboration between jeweler Lorraine Schwartz and Kanye himself, and was designed to look like the huge diamond was floating in the air. (Photo via JB Lacroix/Getty)

6. Solange Knowles: This bauble earned its place on this list because of how unique it is — and because it’s a two-in-one band and ring. For her wedding day, Solange Knowles opted for an open-design gold band with two bezel-set stones. Did you really expect Ms. Knowles to have normal wedding jewelry?

7. Fergie: Power couple Fergie and Josh Duhamel aren’t your ordinary duo, so of course their ring would be completely out of the box. The four-carat brilliant-cut diamond is set in a wide band featuring a variety of cognac diamonds. The whole shebang was made by H. Stern Jewellers. (Photo via Jon Kopaloff/Getty)

8. Mariah Carey: You can’t think of “diva” without thinking of Mariah Carey, and this diva topped all the other wannabes with her epic engagement ring. While Kim K’s whopper of a ring stunned at 15 carats, billionaire businessman James Packer gave Mimi a Wilfredo Rosado bauble that clocks in at a finger-tipping 35 carats. (Photo via Frederick M. Brown/Getty)

9. Halle Berry: Olivier Martinez gave Halle Berry a ring chock full of meaning. The diamond and four-carat square-cut emerald Robert Mazlo ring is hand-forged and apparently contains Phoenician codes that tell the couple’s love story. All that for the low, low price of a reported $200,000. (Photo via Gregg DeGuire/Getty)

10. Lady Gaga: We don’t envy Taylor Kinney at all. It must have been really hard to find an engagement ring that would suit Lady Gaga’s OTT personal style. Still, we think the actor and model made all the right moves with this sentimental ring. Now, the marriage may be off (the couple split this July), but this heart-shaped Lorraine Schwartz sparkler, clocking in at about six carats, lives on in our memories.

12. Ciara: Ciara and Russell Wilson’s relationship has been #goals from the beginning. The footballer gave Ciara a round, brilliant-cut ring featuring a 16-carat diamond. You know, no biggie. As if that wasn’t enough, that rock is surround by four trapezoid and pear-shaped diamonds on the outer edges. (Photo via Jon Kopaloff/Getty)

13. Natalie Portman: The whole getting married thing can be hard on a green bride-to-be, but it seems Natalie Portman’s now-husband has navigated those waters just fine. Benjamin Millepied presented the actress with a ring made with eco-friendly recycled platinum and conflict-free diamonds. And while the ring is easy on the conscience, it didn’t skimp on style or luxury. The center diamond is four carats surrounded by a double halo of pavé diamonds. (Photo via Dominique Charriau/Getty)