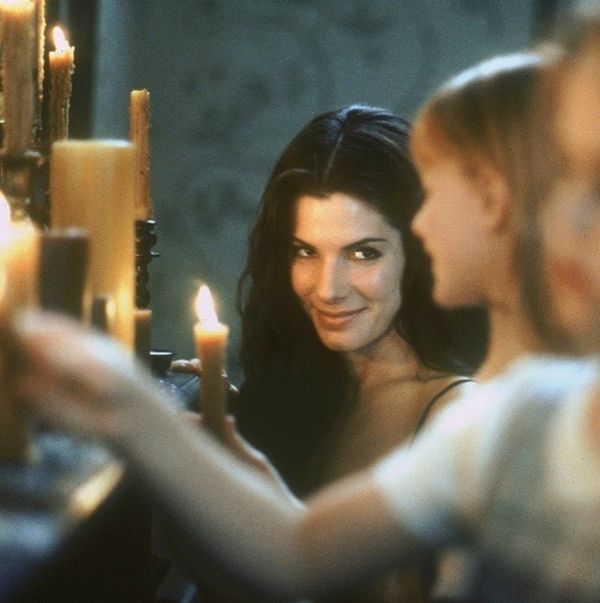 Halloween is practically right around the corner (do you have a costume yet?), and while there are sure to be plenty of accompanying films hitting the small screen soon, we simply can’t wait that long. While Netflix is always at the ready, there’s just one teensy, tiny little problem — for all its genres, Netflix doesn’t seem to have a “Halloween” category — not even in the hidden section!

Luckily, you won’t need one, since we’ve gone ahead and curated an epic list of kickass, holiday-appropriate films you can stream from the service right now. A helpful hint? Mayyyybeee don’t watch these alone, or right before bed. Don’t say we didn’t warn you…

1. Practical Magic: Witchcraft tends to have a serious moment this time of year (Hocus Pocus, anyone?), and while there’s certainly no shortage of classic films regarding the occult, Practical Magic (starring Nicole Kidman and Sandra Bullock) has to be one of our favorites. After all, who hasn’t wanted to put a spell on a creepy ex-boyfriend or fly down from the roof on Halloween night? Throw in some drunk aunts and midnight margaritas and we’re sold for life. (Photo via Hulton Archive/Getty)

2. Sleepy Hollow: We’ve all heard the Legend of Sleepy Hollow, what with its intimidating headless horseman and all, but what if you actually saw him? Hence is the dilemma of Johnny Depp and Christina Ricci (our fave!), a colonial couple in love just trying to navigate their seemingly paranormal surroundings. (Photo via Sleepy Hollow/Paramount)

3. The Amityville Horror: A supposedly true nightmare-come-to life, this remake of the 1979 classic (based on the book of the same name) reenacts the events of an evil house terrorizing its residents — one of which just so happens to be Ryan Reynolds. Though the real man Ryan portrays was none too pleased with the flick (he sued the filmmakers for defamation, libel and breach of contract) and the film is a lot more loosely based than its predecessor, it’s still terrifying enough to make for one hell of a movie night. (Photo via MGM)

4. Sweeney Todd: The Demon Barber of Fleet Street: Just in time for our favorite holiday comes this creepy, new-to-Netflix musical about a barber with both a vengeance and a baritone voice to tell the world about it. With campy gore and melodic showtunes, Tim Burton offers a lighthearted air to the extremely dark subject matter (meat pies, anyone?) as only he can. (Photo via DreamWorks)

5. The Houses October Built: Much like The Blair Witch Project before it, The Houses October Built is filmed in such a manner that you’re not entirely sure whether you’re watching documentary footage gone wrong from a group of friends or an actual film, making it all the more creepy. On a cross-country trip to visit the most daunting haunted houses they can find, this group gets a litttttleeee more than they bargained for when things stop being pretend. Do be warned — this one is so relatable and realistic, in fact, it had us checking hallway corners for any, uh, visitors before bed. (Photo via Image Entertainment)

6. Extraordinary Tales: Animated though it might be, this film is not for kids. A retelling of the works of Edgar Allen Poe through animated versions of five of his most beloved tales, Extraordinary Tales is dark, twisted and, well, entirely Poe — AKA your perfect film companion for Halloween! While likely a bit flowery for some, fans of Poe (and the written word in general) are in for a real treat. (Photo via GKids)

7. The Babadook: This indie flick sees a monster come to life from the pages of a book. With the power to both make paranormal things happen as well as possess its victims (which, in this case, happen to be a widowed mother and her six-year-old son), The Babadook is kind of like a page-turner in movie form (ironic, no?). (Photo via IFC Films)

8. The Exorcist: It’s been 43 years since this film was released and longer still since the real events that inspired it, which are said to have taken place back in 1949. And yet, this classic thriller still has the ability to scare the pants off of us like none other. Based on a little girl (boy in real life!) who is possessed by a demonic presence, The Exorcist has sparked many a nightmare — view with caution! (Photo via Warner Bros./The Exorcist)

9. The Addams Family: There’s nary a time of year that isn’t Halloween for this peculiar family, and yet, October is their time to really shine. Forever dressed in black and all but, well, dead, The Addams’s are best described by their theme song (creepy, kooky, mysterious and spooky all sound about right). Their film debut sees them all come together to ferret out a rat in their clan. (Photo via Paramount/The Adams Family)

What’s your favorite Halloween movie? Share with us over @BritandCo.

Nicole Briese
Nicole is the weekend editor for Brit + Co who loves bringing you all the latest buzz. When she's not busy typing away into the wee hours, you can usually find her canoodling with her fur babies, rooting around in a bookstore, or rocking out at a concert of some sort (Guns N' Roses forever!). Check out all her latest musings and past work at nicolebjean.com.
Halloween
Pop Culture
Halloween Netflix
More From Pop Culture