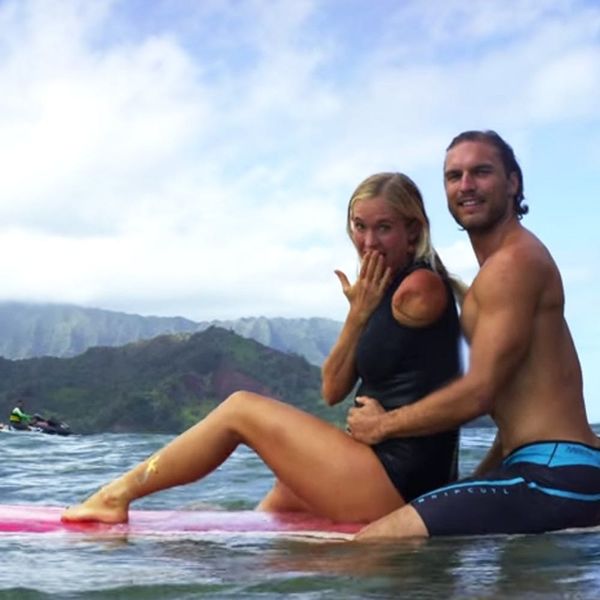 There are so many noteworthy ways to share your pregnancy with your friends, family, Facebook followers and possibly the world. Whether it’s a timelapse of the nine months, asking your BFF to be the godmother on Instagram or even making a photo diary of you decorating your newborn’s nursery (hey, Ansel!), the milestone moments don’t stop. One celeb who is going the extra (nautical) mile for her memorable pregnancy achievements is Bethany Hamilton.

The surfer, who lost her left arm at the age of 13 to a tiger shark, has been back up on the board ever since the accident and now has a second rider on the waves. Bethany and her husband Adam Dirks announced their pregnancy via YouTube last month (see the adorable video below!).

Now six months pregnant, she is still standing up and hitting the waves. She told People what it’s like to have her future son riding with her, “It’s such a weird feeling to be surfing in the ocean while my baby is moving around inside me. It’s a cool feeling, but I noticed my balance is a little off and I fall more, so I’m having to focus.”

While this may be atypical for most women that are six months pregnant, it is not uncommon for a Hamilton. The surfer told People that her mom surfed throughout her pregnancy. While she doesn’t think she will go all nine months standing up on her board in the water, Bethany believes she won’t take a surf break until she is eight months along. Surfs up, you two!

Will pregnant surfing become a trend courtesy of Bethany Hamilton? Let us know your thoughts in the comments.