Emmys 2018: Betty White Steals the Show as the ‘First Lady of Television’ 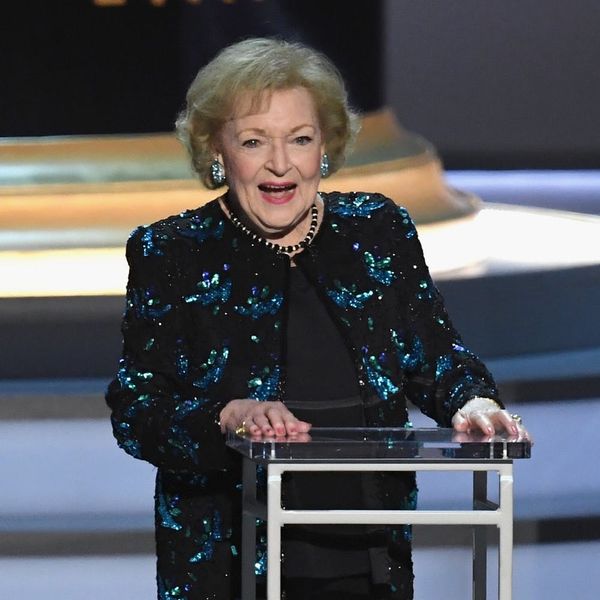 The Television Academy took some time to honor Betty White at the 2018 Emmy Awards on Monday, September 17, and although she was only onstage for a few minutes, the Golden Girls actress was all anyone could talk about on Twitter for a long time after that.

Alec Baldwin and Kate McKinnon introduced White, who entered to a standing ovation from the audience inside LA’s Microsoft Theater. “I’m just going to quit while I’m ahead,” she joked before pretending to walk offstage.

The 96-year-old actress then delivered a touching (and very funny) speech about her decades-long career. “This is very exciting. I thought the biggest, most exciting night I had ever had, I’m talking to Lorne Michaels now, was the night that he gave me an honor. But boy, you topped yourself tonight, Lorne,” she joked.

“Somebody said something the other day about [me being] the first lady of television, and I took it as a big compliment,” she continued. “And then I heard her talking to her daughter a little later — she said, first lady, yes, she’s that old, she was the first one, way, way back.”

As the audience laughed, she continued: “Little did I dream then that I would be here. It’s incredible that I’m still in this business … and you are still putting up with me.” When the crowd began to applaud, she cut them off, saying, “No, I’m thanking you. It’s incredible that you can stay in a career this long and still have people put up with you. I wish they did that at home.”

She concluded her speech with one final joke and another thank you to Hollywood. “I want to thank Lorne Michaels for doing not only this tonight, but all the wonderful things he’s done with me… no, for me,” she quipped. “And all I can say is, it’s such a blessed business to be in, and how lucky can I be, and how much can I say thank you to each and every one of you. Thank you so much.”

What did you think of Betty White’s Emmys speech? Let us know @BritandCo!

Desiree O
Desirée O is a ‘Professional Bohemian’ who loves anything and everything related to the arts, entertainment, and pop culture. She ADORES being a ‘Newsy’ for Brit + Co, covering all of the latest tidbits of awesomeness that you want to read about. When she’s not writing, she’s either making messy art, going on long adventurous walks with her camera, or poking around over at bohemianizm (http://www.bohemianizm.com/). You can find out about Desirée O and her work at http://DesireeO.com/ or follow her on Twitter @DesireeO.
Awards Shows
TV
Awards Shows Emmys
More From TV