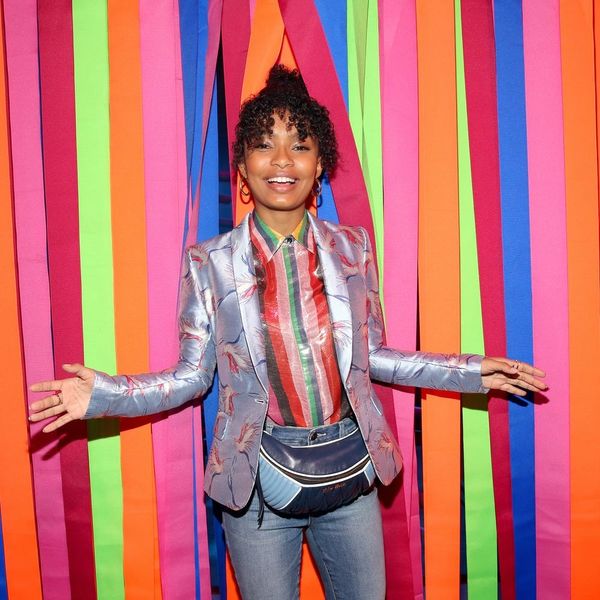 You probably know her from her critically acclaimed role on black-ish, but Yara Shahidi is much more than the character she plays on the small screen. Along with being a talented actress, Shahidi is passionate about being a social justice warrior that her fans can look up to — a passion that has led to her interviewing Hillary Clinton at the Teen Vogue Summit earlier this year, being accepted into Harvard with a high-profile recommendation letter from none other than Michelle Obama, and becoming the founding member of Yara’s Club, a partnership with The Young Women’s Leadership School to teach high school students how to take action on important social issues. Despite a busy production schedule for her upcoming black-ish spinoff, the up-and-coming star chatted with us about her new big role, her current ambitions, and what’s ahead for 2018.

B+C: Congratulations on getting your very own black-ish spinoff premiering this January on Freeform! Does it feel surreal being the lead actress in such a highly anticipated project, or did you feel ready for this exciting new challenge?

Yara Shahidi: Thank you! It does feel surreal leading my very own show. I’m so excited to release it to the world for fans to connect with it and share and reflect on their own experiences with higher education. Although it’s a little surreal, I welcomed the challenge and I’m grateful that Kenya Barris, the creator of grown-ish and black-ish, wanted to share Zoey’s story as she navigates a new world and discovers who she is.

B+C: Okay, we have to ask… can you give us any hints about what Zoey’s going to be up to during the first season of grown-ish?

YS: Well, I can’t give it totally away… but what I can share is that you’ll see Zoey navigate a variety of issues as a freshman. Tune in!

B+C: Let’s talk a little about social media. As a notable woman in the spotlight, you often use your Twitter and Instagram accounts to make your followers aware and more involved in politics and social justice. Why do you think it’s so important for people with a large platform to inspire others to push for change?

YS: I try to use social media as a tool for good and a source to share information. There is just a lot going on in the world. As overwhelming as the hashtags on Twitter can be, it’s also inspiring because it’s the same place where I’ve met a lot of my friends, my peers who are activists and who are killing the game right now and helping to save the world. So it’s from a place of “this is sad, but look, there they are to fix it.”

B+C: Speaking of social media, how do you handle negativity online?

YS: For the most part I can say that social media has treated me pretty well. Mean comments are directed at me every now and then. It’s interesting because, let’s say a rude or off-putting comment comes in; rather than ignore it, I’ll talk to that person, and there are so many times I’ve gotten apologies, like “I totally understand; I’m with you.” All sorts of responses.

B+C: You’ve recently partnered with Always for the Keep Going #LikeAGirl Campaign. Can you tell us a little about why you decided to work with Always on this confidence-boosting campaign?

YS: I love what Always is doing to support my young peers. I admire the #LikeAGirl campaign and am excited to be partnering with them. It’s disheartening to know that half of girls feel paralyzed by fear of failure during puberty. As a young woman myself, and an advocate for my peers, I want to help girls understand that failing isn’t the end of the world, but could be the very thing that assists in our growth and confidence building. I talk about my own experiences with failure, in the hopes that girls will see that if they Keep Going #LikeAGirl, they will do amazing things too.

B+C: Like you mentioned, according to a recent Always study, 50 percent of girls feel paralyzed by the fear of failure during puberty and therefore miss out on fundamental learning and growing opportunities. As someone who has worked in the entertainment industry from a very young age, have there been any moments where you’ve been afraid to fail?

YS: Growing up in and around the entertainment industry has helped sharpen my ability to speak my mind, be creative, and enjoy the outcome of hard work. And luckily, everyone I get to work with is very supportive. Aside from that, I was actually in honors English during my freshman year of high school and my first assignment in class was to write an essay — easy, I thought — but when the grade came back, I scored a C. My first C in any class, on any assignment!

To say I was devastated is an understatement! I actually thought that this grade would end up defining who I was for the rest of my academic and personal life. I even had a moment of thinking that it could change my future options.

Luckily, my parents were there to help me reframe how I thought about that grade. It took a few weeks, and many conversations with my parents, but soon I stopped seeing my grades as such a personal reflection of myself. I realized that I could use this grade as an opportunity to learn more about myself. I didn’t know everything about writing well, and I still don’t. And I learned that I shouldn’t compare myself to anyone else. That kind of thinking wasn’t going to help me get better; only perseverance would do that. So slowly but surely, I put more and more work into my writing, and each essay got better and better. One of my final essays of that semester was so well-written that my teacher actually uses it in other classes as an example of what she looks for in critical analysis. I was so proud in that moment, and it really showed me that if you keep going, even when it’s hard, you can accomplish amazing things.

B+C: If you had the opportunity to give young girls who are struggling with self-confidence one piece of advice, what would it be?

YS: I know how scary failure can feel, but working through a setback will only help them build confidence. Don’t be afraid to push forward and keep going.

B+C: Do you have any specific goals or resolutions for 2018?

YS: I’m launching a new initiative titled 18X18 which will be a platform to encourage my peers to vote for the very first time in our upcoming midterm elections. I’m definitely excited about it. Definitely continuing to produce and direct, more grown-ish, and taking a bit more time out to rest.

2. One album you’re listening to on repeat? Tyler the Creator’s Flower Boy.

3. One place that you’ve never been but always wanted to go? Athens, Greece.

4. Favorite holiday tradition? Eating incredible dishes that my parents work so hard to make and also selecting a charity to donate to as a family.

5. Best present you’ve ever received? A pocket watch from my gramps, and for a graduation present my family took me to see Raoul Peck speak at the Schomburg Center in NYC.

Are you excited for the grown-ish premiere this January? Tweet us by mentioning @BritandCo.

Ashley Macey
Ashley Macey is a lifestyle freelance writer who loves all things fitness, wellness, and creativity. When she's not exploring her home in the Pacific Northwest with her dog Max, you'll probably find her curled up with a good book and some hot tea. Follow her daily jaunts on Twitter.
Creativity
Pop Culture
Creativity interview social media TV