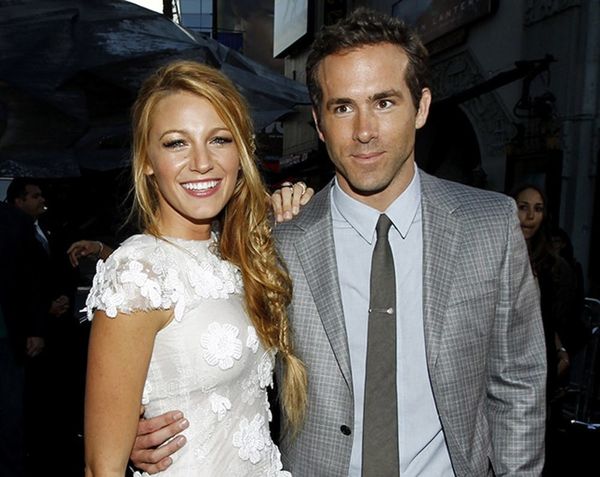 In 2012, Ryan Reynolds and Blake Lively made us fall in love with their coupledom when they threw a super secret, surprise wedding for themselves with 35 of their closest friends. And while they’ve kept most of the photos of their intimate day under lock and key, there were a few details they were willing to share with Martha Stewart Weddings, who helped design the affair. The details we’re referring to are the desserts… lots and lots and lots of desserts, including a giant cake, s’mores, espresso beans, shortcakes, two different tarts and fruit jellies. And we’re here to help you steal their style and put those sweet treats on display for your own wedding guests.

But before we give you the biggest toothache you’ve ever experienced, first, know this: The two got married at Boone Hall Plantation in Charleston, SC — which just so happens to be Allie’s summer house from The Notebook. (Seriously, can these two get anymore romantic?) The ceremony took place in the plantation’s historical barn and the reception was in a white tent.

As a sort of welcoming “Hey, you were one of the lucky few to be invited to our totally hot A-list wedding,” Reynolds and Lively handed out silhouette cards. We’re thinking your programs should follow suit. You can DIY up your own black-and-white profiles by following this tutorial. Or do as the tutorial suggests, and use your profiles as your cake topper.

Speaking of cakes and all those sweets, word on the street is that the Gossip Girl goddess would gift her costars with baked goods on the regular, so it should come as no surprise that there was so much focus on the dessert table on Blake + Ryan’s big day. But unless you’re extremely ambitious, you might want to call in the pros when it comes to creating a similar cake. We’re talking a four-tiered vanilla and sour cream cake with peach apricot preserves and an Earl Grey buttercream frosting. I mean, do you think Florence Welch will sing at your wedding if she knows she’s just going to get a crusty day-old cookie? We think not.

We’re no strangers to s’mores that forego the campfire, but this elegant take will catch the attention of even the biggest graham cracker gourmande. To make your own classy camping classic, try this tart recipe. It’s thisclose to being just as pretty.

Blake and Ry wanted to keep partygoers like Bette Midler (!!) rocking through the night. Their solution? They offered up coffee-and-cream espresso beans. You can buy the exact same ones over on Nuts.com for $9 per pound. The most important detail here is to serve them in gold cupcake liners. Up the ante by going for Anthropologie’s glittered scalloped version. $20 will get you 12 of them.

Is there anyone in the entire universe who doesn’t like a teeny tiny fruit-topped tart? You can make these suckers without even preheating the oven. That’s right people. We’ve found a no-bake version. On the other hand, if you want to swap the blueberries for cherries and invite a little bourbon to this tarted up party, we think it’s well worth firing up the old oven for these buttermilk bourbon cherry tartlets.

We’re seeing Blake and Ryan’s lemon tarts and raising them by spiking them with limoncello. Whose wedding’s going to be the talk of Hollywood now, eh, Lively-Reynolds?

Real talk: As adorable as a mini berry shortcake is, it’s nothing anyone hasn’t seen before, not to mention a mess to eat. If you’re looking for a true berry handheld, may we suggest the ever so easy three-ingredient strawberry hand pie. (Is it weird that we’re drooling at its mere mention? Yup, it’s that good.)

By now the wedding guests were crying for mercy on the sugar front, but the sweet rush wasn’t over. Fruit jellies, enter stage left. As pretty as these are, we suggest leaving them off of the dessert table and instead making them up as party favors for the road. There are a few things we like about taking on this project yourself. They only require four ingredients, they can easily be made vegan and they last up to two weeks.

When you have this many little nibbles for guests to eat up, you’re going to need to label them. But before you fire up Word and start printing out some Times New Roman descriptions, let’s talk about doing something else — something called calligraphy. Hiring a calligraphy artist can cost some major coin, but you should be happy to know that you can learn to do it yourself in the Brit + Co Summer School.

Oh, and here’s a little bonus for you. Blake’s bouquet was made up of pink jasmine, andromeda, dusty miller and blushing bride hydrangea. Some of the petals were dipped in rose-gold glitter (yes, glitter!) to play up the rose gold embroidery in Blake’s one-of-a-kind silk and tulle Marchesa gown. If you’re ready to start your own floral arranging endeavors, may we suggest taking this online class with your closest friends, mom and soon-to-be mother-in-law. It’s going to take a team of you to tackle florals when your big day rolls around.

The lone public image of the cute-overload couple is this picture of the twosome holding hands. While we want to see more — we’re not sure we could handle it. They’re just too freaking perfect.

If you have a super creative wedding you’d like to share, we want to know! Just send a note to editorial@brit.co or leave us a message in the comments below!

Lex Monson
Alexis is the co-founder of Punkpost, the app that lets you send handwritten cards (yes, handwritten by a real human) in the amount of time it takes you to send a text message. The exclusive card collections are created by a community of artists and designers and hand letter pressed on high-quality cotton paper. Get the full experience by downloading the app from the iTunes Store.
Blake Lively
Party
Blake Lively recipe roundup Sweets
More From Party