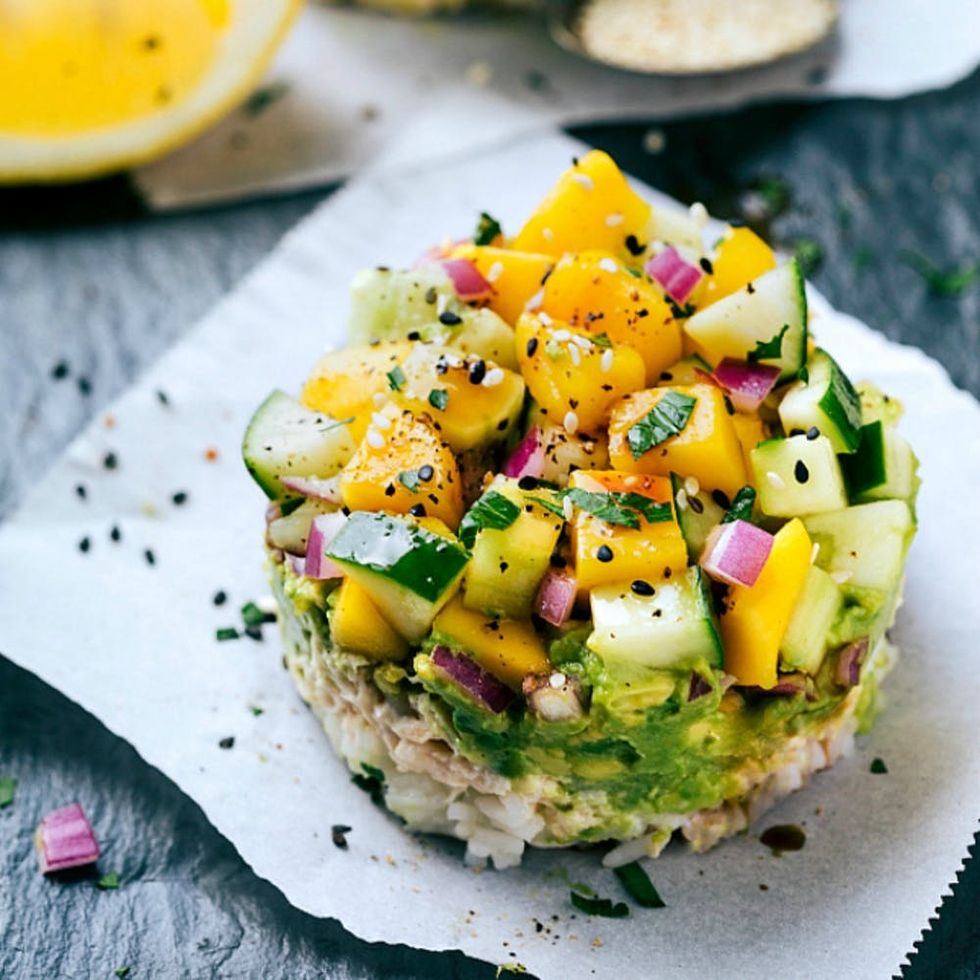 Notice how tuna is almost always on the top 10 list of everyone’s most valuable pantry staples. Not only is tuna a cheap and convenient source of protein, it’s also SOOOO versatile. You can make everything from tuna sandwiches to tuna melts to tuna risotto and more. And after the icky news about fake sushi, you may even want to try your hand at making your own sushi stacks and sushi burgers at home too. Here are 18 recipes so tasty, they’ll make you look at the humble can or jar of tuna with new respect.

Wondering whatever happened to the open-faced bagel sammie? It’s still around, and looking yummier than ever. Let’s be real — sometimes, you just NEED cheesy, carby, comfort foods right now. (via Half Baked Harvest)

This isn’t really sushi, since the tuna isn’t raw, but it definitely curbs the sushi craving. Pro Tip: Tuna packed in pure olive oil holds the stack together well and gives everything a rich, fresh fish flavor. (via Chelsea’s Messy Apron)

This Thai take on the tuna fishcake packs a spicy punch. Big flavors of lemon grass, ginger and chili go — POW! — right in the taste buds. (via Krumpli)

If you have rice, nori sheets, canned tuna and mayo, you’ve got the fixin’s for spicy tuna sushi rolls. This is the recipe to have on hand during nighttime Netflix binges when the *hangries* come calling. (via Pickled Plum)

This big bowl full of yum calls for leftovers you probably have in your fridge and pantry. The lemon vinaigrette ties everything together with a real zing. (via The View From Great Island)

These Asian-inspired tuna patties come together quickly in the food processor. Coated with nutty sesame seeds and pan-fried to crisp perfection, they are SERIOUSLY tasty. (via Sugar et al)

This Cajun take on a tuna sammy is absolute genius. There’s nothing like fried seafood on a hoagie with a drizzle of remoulade to fill your belly in the most satisfying way. (via Eatin’ on the Cheap)

These toasty melts are oozing two kinds of cheese. Baking them on a sheet means you can easily turn a batch out for a crowd at your next gathering. (via Aberdeen’s Kitchen)

Get ready to ride the foodie time machine, because this tuna noodle casserole will really take you back. This recipe is adapted for adult tastebuds, so prepare to meet your new fave throwback recipe. (via 2Teaspoons)

When you’re wracking your brain for what to do with that can of tuna that will travel well to the office for lunch, don’t overlook the humble wrap. The Sriracha mayo is the star of this show — it really takes tuna salad to the next level. (via Chelsea’s Messy Apron)

If you’re into the big cook-up for the week, you can’t go wrong making power bowls for lunch because they keep so well. The Thai peanut dressing is the pièce de résistance, bringing MAJOR umami to your bowl. (via A Cookie Named Desire)

You’ve never tasted meatballs like this before! Stuffed with pesto rice, they’re so good that your taste buds will be doing the happy dance for sure. (via Sugar et al)

These veggie boats come together quickly and call for just five ingredients that you probably have on hand. They’re a perfect meal for those nights when you have to work late and come home ravenous. (via The Blond Cook)

These bite-sized tuna quiches look sophisticated, but they’re super easy to make and are so very impressive. They’d be a perfect appetizer for a special-occasion brunch or reception, but your game night gang would also gobble them up. (via The Flavor Bender)

This chili pepper aioli may be the best thing to ever happen to canned tuna. And the risotto inside fries up so light and puffy — they’re like little pillows of delicious goodness. (via Girl and the Kitchen)

Sometimes you just crave the comfort of a tuna sammy — amiright? This one is destined to become your new fave. That nice crusty roll holds the mandatory tasty mayo SOOOO fabulously. (via Two Purple Figs)

18. Homemade Tuna Sushi Stacks With Mango Salsa: These sushi stacks are fancy AF, but super-easy to pull off. Everyone at the table will be so impressed.

Sally Jones
Sally Jones is a writer and editor living in New York City. She has worked at many websites including iVillage, Ladies Home Journal, More, Parenting, Cosmopolitan, The Knot and YourTango, in jobs ranging from editor to COO. Renovation and interior design are her unhealthy obsessions hobbies. She has renovated every home she's lived in, including the rentals, and like... whoa, who does that? You can catch her at her blog Renov8or.
Food Recipes Roundups
Recipes
Food Recipes Roundupsrecipe roundup
The Conversation