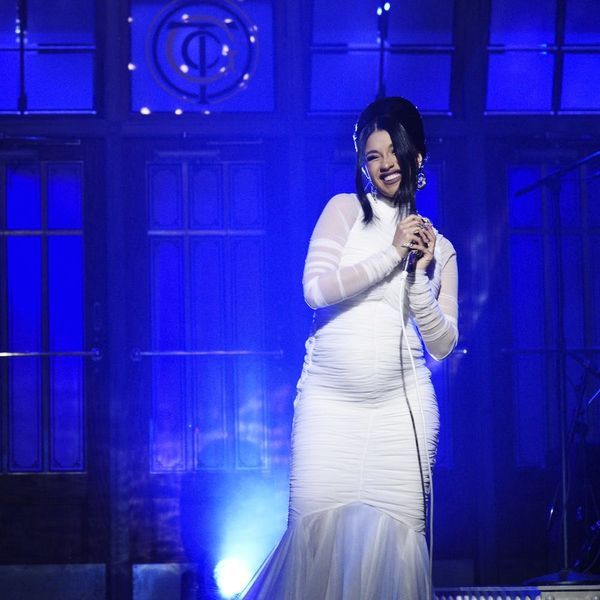 On Saturday’s episode of Saturday Night Live, amid much public speculation, rapper Cardi B confirmed that she’s expecting a child with her fiance, the rapper Offset. She’d been keeping the pregnancy quiet to protect her privacy, and she isn’t the first high-profile baby mama to do so this year: On February 4, following five months of pregnancy rumors, Kylie Jenner announced she had given birth to a baby girl, Stormi Webster, and had chosen to remain off social media like Instagram during her pregnancy as to create a positive, stress-free environment for herself and her child.

Announcing a pregnancy via social media has become so common that, often, expectant parents do so without a second thought. It’s easy to spot the appeal in sharing the exciting news with your friends and family in a few easy clicks. But for some pregnant moms, the convenience isn’t worth trade-offs like self-comparison, stress, and prying relatives, which can be annoying and even detrimental to a new mom’s mental health. This means that growing numbers of millennial moms-to-be are facing an unexpectedly tough question: To ‘gram or not to ‘gram?

Linda Ortiz, a mother in southern New Mexico, tells Brit + Co that the decision to document her pregnancy on social media is one she now regrets.

“If you do post about [your private life], then you are giving [others] the privilege to give an opinion on it,” says Ortiz.

Ortiz, whose daughter is now two, had a complicated pregnancy. For one, she didn’t find out she was pregnant until five and a half months in — she hadn’t had any signs or symptoms like weight gain, and because of the birth control she was taking, didn’t think twice about her missed periods. The timing was also awkward: Ortiz had just moved to Mexico to live with her father.

When the pregnancy prompted her return to the States to consider her options going forward, Ortiz posted about it online. She tells us that her friends and relatives bombarded her with questions about the child’s father (Ortiz is a single mother) and the circumstances of her pregnancy, which made an already stressful situation even more complex.

“The more everyone knows, the more stress you’re going to have,” she says. “My thing is, happy mom, healthy baby. The happier [you are], the better for the baby itself.”

Liana McRae* (name has been changed) would disagree. After moving to the southern US with her husband, social media allowed McRae to keep in close contact with her loved ones throughout her pregnancy.

“After I had been a few weeks pregnant, my family and friends up north wanted to see how big my belly was or how many weeks I was, so honestly, it was easier just to post one post that literally [everyone] could see at once, rather than trying to text [them all individually],” McRae says.

McRae recalls that the comments she received from posting online were positive, and people generally didn’t ask too many personal questions — except when it came to the baby’s name, that is.

The jury’s still up on whether there’s a “right” answer to the question of whether or not to share one’s pregnancy online. A 2017 study concluded that Instagram is the worst social media network for users’ mental health, and linked the photo-sharing platform with depression, anxiety, and identity issues among teens. On the other hand, even Beyoncé isn’t above using social media to share her happy news; her 2017 pregnancy photo was the most-liked Instagram post of that year.

No matter your preference when it comes to posting on social media, pregnancy is an emotional and, sometimes, stressful situation. Each and every parent has the right to decide what is best for them, whether that be sharing daily updates or completely holding back.

To ‘gram or not to ‘gram: What’s your take? Tell us @britandco!