See How These 15 Celebs Got Their Halloween Weekend Started 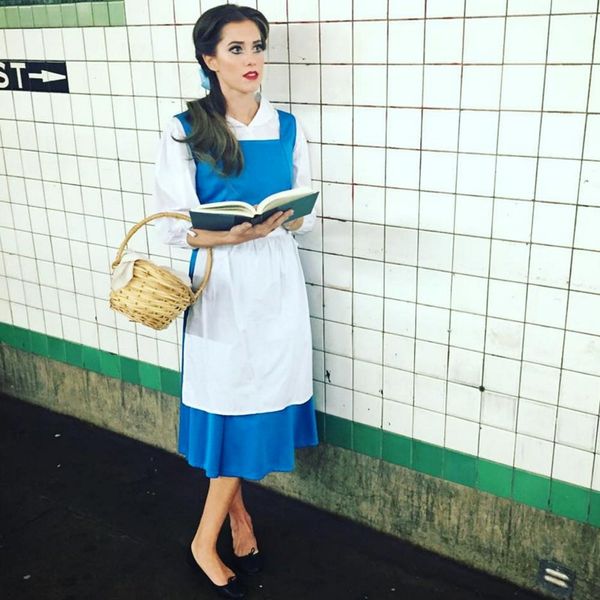 Brush off your pumpkins and don your costumes because Halloween is officially today! But everyone knows that the spookiest holiday of the year is really more of a weekend-long celebration. I mean, some of our favorite celebs even started the festivities last Saturday. Last night was a big one for All Hallow’s Eve festivities. If you’re still not sure what to dress up as tonight or you’re in need of some activity inspiration, might we suggest you look to these celebs to see how they started their Halloween weekend off on the right foot.

1. Lauren Conrad: What exactly is this costume? Unclear. But we know one thing, it’s definitely spooky. Our best guess is a slightly more stylized version of The Shining twins. (Photo via @laurenconrad)

2. Ariana Grande: While performing at an event for iHeartRadio, Ariana Grande traded her standard high pony for a look that was a little bit scarier but still with a definite element of glam. (Photo via @arianagrande)

3. Kelly Rowland: Naturally, the pop icon that is Kelly Rowland went as the OG glam gal, Cleopatra. Can we add that the statement neckpiece is KILLER. Slay, girl, slay. (Photo via @kellyrowland)

4. Miley Cyrus: It looks like Miley wasn’t kidding when she shared a sneak peek of her “Cindersmelly” costume. Before the festivities were under way last night, Miley shared this snap of her prepping for the adventures that lay ahead. (Photo via @mileycyrus)

5. Allison Williams: Does Allison Williams makes the perfect Belle or what?! She captioned this photo, “Ugh Belle, I’ve been telling you to get a damn Kindle.” (Photo via @allisonwilliams)

6. Gwen Stefani: Yikes! Looks like Gwen decided to go as a farm girl who had a mishap — perhaps with some farming equipment? Perhaps she’s better off sticking to her day job as a rockstar. (Photo via @gwenstefani)

7. Jessica Alba: Yas!! We doubt that Jessica and her friend Kelly wore these outfits to their high school reunion last night but do they look like they invented Post-Its or what? (Photo via @jessicaalba)

8. Kate Hudson: Okay, so this isn’t actually Kate but rather her son who has proved yet again that he is a seriously good dancer. (Photo via @katehudson)

9. Kylie Jenner: As far as what Kylie’s costume is here, your guess is as good as ours but we can definitely confirm one thing: her feet are probably super cozy. (Photo via @kyliejenner)

10. Skyler Morrison: Rachel Zoe’s adorable little fella spent the day as what looks like the most stylish vampire that ever was. (Photo via @rachelzoe)

11. Tyra Banks: In a strange turn of events Tyra Banks chose Virgin’s founder, Richard Branson as her Halloween inspiration. And she nailed it in typical Tyra fashion. (Photo via @tyrabanks)

12. Naomi Campbell: I mean, to be honest, Noami could rock a trash bag for Halloween and pull it off. She looks like some kind of sultry burlesque dancer here. (Photo via @iamnaomicampbell)

13. Sloane Ava Simone Haggerty: For her very first Halloween, Macklemore decided to create a bit of a mini-me moment with his daughter by recreating a scene from his “Downtown” music video. Awww. (Photo via @macklemore)

14. Ashley Benson: We’re breathing a sigh of relief knowing that Ashley decided not to go with that controversial “Cecil the Lion” costume after all. Instead, she and her Pretty Little Liars co-star went as a pair of super stylish vampires. (Photo via @ashleybenson)

15. Channing and Jenna Dewan-Tatum: Seems like Channing is all about those onesie costumes this year. A few weeks ago he rocked a Winnie-the-Pooh costume and last night he and his wife spent yesterday evening evening as his-and-hers versions of the Cat in the Hat. (Photo via @jennadewan)

What’s your favorite celebrity Halloween costume you’ve spotted so far? Share with us in the comments below.