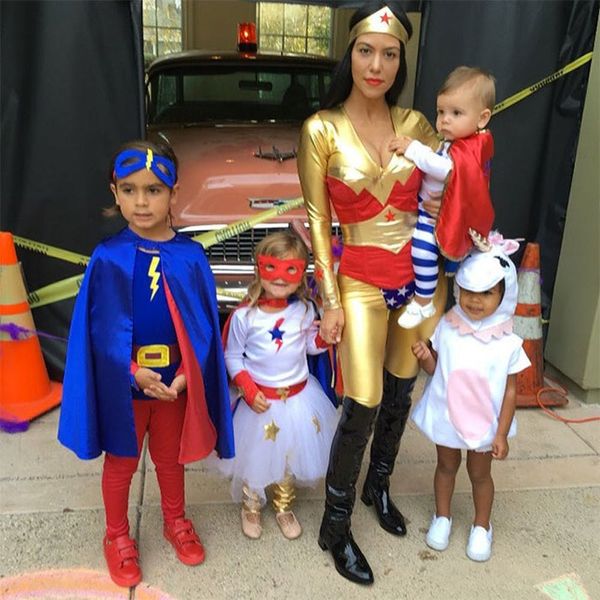 Celebs were out in full Halloween costume force this weekend and it was hard *not* to notice it. Everyone from Ciara + friends to Kourtney Kardashian and her adorable gang of kiddos stepped out in their Halloween best a littttle early this year. Nick Jonas also gave his Snapchat followers a peek at his DIY-able look which was probably the funniest getup of the bunch. It’s all in the details when it comes to achieving legit costumes, and these celebs didn’t cut any corners this year. Let’s check out why these earlybird Halloween costumes were so awesome.

This group is epic and adorable — Kourtney included! Mason, Penelope and Reign all rocked different but coordinating superhero costumes, and honestly, we can’t decide who’s cutest. Penelope’s sparkly leggings? Amazing. Mason’s blue cape? Adorable. Reign’s little white shoes? OMG. Lots of items from these kid costumes can be repurposed from what might already be in their closets: red/gold pants + shoes, blue/white shirts and a white tutu-like skirt — just get creative when it comes to the accessories like the capes, masks and other small details. Let’s not forget about Wonder Woman Kourtney, who looks incredible. Also, North’s unicorn costume is too cute!

Nick Jonas posted a photo on his Snapchat over the weekend that showed him donning a fast food-inspired costume that looked both funny and delicious: the classic Hamburglar. Also a very DIY-able getup, this costume featured a simple black and white striped shirt, a black fedora, eye mask, cape and red shoes + gloves. Oh, and how could we forget his hamburger phone case? That *really* topped it all off ;)

Leave it to Miley Cyrus to reimagine a classic Disney princess into something much more… Miley. “CinderSMELLY” made her Instagram debut over the weekend and, we have to say, Miley’s looking feminine and pretty despite her choice of name for this costume. Her topknot and black choker really tie it all together, but we’re wondering… where are her white gloves?! While this look was pretty covered up and traditional, we’re pretty sure Miley’s got some more costumes up her sleeve in the next few days!

Woah! This has got to be one of the funniest celeb costumes we’ve seen yet — and it’s totally unexpected for this actor. We’re used to seeing him as Teen Wolf, but who knew he could also pull off the evil sea witch from The Little Mermaid? While his makeup is seriously on point for this costume, that wardrobe malfunction is so bad it’s good.

Honestly, if anyone can pull off a leather body suit, Ciara can. Her hair was super sleek in a high, straight ponytail, which help show off her cute cat ears. The brick-red-hued lip brightened up her otherwise all-black look for the perfect pop of color. She also showed up with her QB boyfriend, Russell Wilson, dressed as Batman — you can’t go wrong with this couples Halloween costume.

This gorgeous actress + model made a great Olive Oyl while her son was adorable as Popeye. Despite the fact that her son is just a toddler, he still got in on the huge muscles that are synonymous with the Popeye character. Jordana’s costume is super DIY-able, which is great if you’re a mom-on-the-go who has no time to buy a new costume every year. You can easily add a white collar to a red shirt, throw on a black skirt and you’re all set! The rest of her squad is also in awesome costumes: that spiderweb is *so cute* (and easy to replicate on your own!), while the big + little Michael Jackson’s are TDF.

Kelly Rowland and her Girl Gang as Superheroes

Ciara hosts a *killer* party, complete with an insane guest list and epic theme. Kelly Rowland posted a jealousy-inducing Insta pic of her girl gang hanging out at the party. Notable superheroes we spotted include Catwoman (Ciara), Storm (Beyoncé), Black Canary (Kelly) and Captain America (we *love* the fiery red wig that makes this costume super unique). Can we get can invite next year, please?

There is nothing cuter than a dog dressed up for, well… any occasion. What’s even cuter is when *two* dogs are dressed up as an adorable duo. Case in point? This cop and a robber duo that is too cute for words. We love how innocent the little one looks and those handcuffs?! Doggy couples costumes FTW.

Lily showed up to Ciara’s birthday party in a full-on female Superman costume and we are *obsessed* with it. From the red tutu to the leather shorts underneath, this costume is such a fun take on a traditional getup. A sequin-adorned corset with the classic “S” logo really topped it all off. Don’t forget about the vampy red lip color!

Which of these costumes are you loving? Share your thoughts in the comments below.