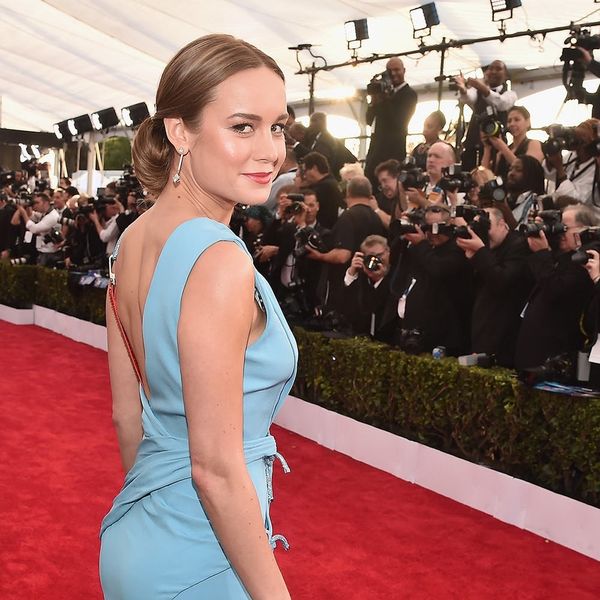 For Trevian Kutti, the night before the Oscars will be a sleepless one. As the primary stylist for actress Regina King, head director of celebrity and media relations for fashion designer Krikor Jabotian (where her role also includes styling stars like Oscar nominee Brie Larson this weekend) and a fashion consultant for designer resale site RE/LABLD, she’s got a lot on her plate.

“I don’t sleep because I’m anxious,” she tells us. “I’m anxious to get it done. I’m anxious for perfection. I’ll be up in the middle of the night, making sure there’s nothing left to do or seeing if I have to call a showroom or a designer, to meet on a Sunday morning before the awards show,” she explains. “I need to make sure when my client is out there on the carpet, they feel that they are number one.”

Besides Brie, Trevian is also styling Australian actress Alyssa Sutherland for Sunday night’s big awards — but no pressure or anything. Okay, maybe a little. Okay, maybe a lot.

“People have no idea of the stress you are under,” she shares. “You are in charge of this person’s identity to billions of people.”

That’s not to say Trevian doesn’t love every second of her job. Where others may be daunted or overwhelmed by that kind of pressure, Trevian insists that she loves the pace. Which is good, considering it’s more or less nonstop. Especially when you’re talking Oscars.

From there, Trevian creates a concept for her client’s look. “I always start internally,” she says. “When I was dressing Regina King for the 2015 Emmys (which she won), I asked her, ‘do you have anything in mind?’” Regina didn’t, but luckily, Trevian did.

“I told her, ‘I want you to look ethereal, as if you are floating,’” she says. “I create the concept… it probably comes to my mind about two weeks prior… and then I find things that fit that outline.” Within reason, of course: “I’m a bit outlandish,” Trevian admits. “I have to pull back a little bit to get them in their comfort zone. But I always like to stretch the limit. They trust me, so we get to a happy medium.”

There are also external elements to consider. Prior to choosing anything, Trevian not only meets with her clients to see if there are any requests and or/physical traits she may need to take into account — recent surgeries, cuts, body insecurities, you name it. She also consults with makeup artists and scours magazines for hairstyles to create a head-to-toe look. By the time the first fitting is upon them — there are usually two fittings, a first and a final — she has “everything from color swatches to gowns, jewelry, shoes and bags” on hand.

“The first fitting is when I have the bulk — it can be anywhere from 15-20 gowns,” she says. “The Oscars, the Golden Globes, the SAG Awards, they all kind of command a gown.” But Trevian says the accessories can be equally important. “I always like to style, which is to coordinate,” she says. “I’ll look for pieces that have the same power as a gown or a dress — that always makes a celebrity stand out more.”

A day or two before the big event is when the second fitting occurs; this Friday and Saturday will be Oscars crunch time. Trevian will have narrowed down her choices by then, and a seamstress will be on hand to make final alterations — or, at least, mostly final. ‘Cause when it comes to showbiz, you’ve got to be prepared for anything, and we do mean anything.

“Something could happen where we end up changing everything the day of,” Trevian says. She tells us about the time a client’s pet killed Trevian’s whole look in an instant, when the client’s dog pulled at the bottom of her dress on her way out the door and ripped the whole bottom. And that’s just one example. “A diamond could fall out of an earring that’s noticeable,” she says.

Once all the kinks have been ironed out, it’s showtime. Annnnnd enter bated breath. “My main goal as the stylist is to always go for the best dressed,” Trevian says. “However, it’s not about me, it’s about my client. They will look as good as they feel.”

Regina King was clearly feeling good the night she not only won her Emmy, but also snagged Trevian coveted props from E! Online as a best dressed contender in Krikor Jabotian. The look was also, coincidentally, Trevian’s favorite, and for good reason. “There was nothing on the carpet that could compare to it,” she recalls. “Every pearl, every stitch was made by 10 women over 1,780 hours.” Wow. Talk about intricate! “Every crystal was put there by the hands of someone.”

And when Trevian finds herself at the dreaded opposite end of the spectrum, and lands on a critic’s (gasp!) worst dressed list? “That has happened, and how I deal with that is I evaluate what was said and I do internalize it for next time,” she says. “But does it change my overall styling or my client’s preferences? No. They get people interested by saying something negative — what they don’t understand is that celebrities are very sensitive. They’re actually dealing with a person’s life and feelings. You can’t please everybody, and that’s the end,” she says.

Except that it isn’t. Once the Oscars are over, Trevian’s job is far from done. “You don’t get a break,” she says, referring to the countless events she’ll be styling throughout the year, and the photo shoots to boot. “It does not stop. You really have to love what you do in order to maintain your invigoration and your power.”

Will you be watching for Trevian’s handiwork on the red carpet this Sunday? Let us know on Twitter at @BritandCo!

Nicole Briese
Nicole is the weekend editor for Brit + Co who loves bringing you all the latest buzz. When she's not busy typing away into the wee hours, you can usually find her canoodling with her fur babies, rooting around in a bookstore, or rocking out at a concert of some sort (Guns N' Roses forever!). Check out all her latest musings and past work at nicolebjean.com.
Oscars
Style News
Oscars Red Carpet
More From Style News