10 Celebrity Weddings That Prove Winter Nuptials Are Worth the Chill 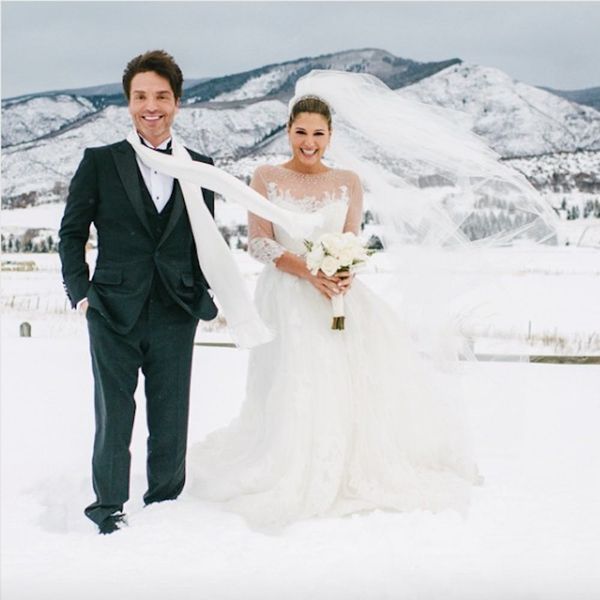 Sparkling, snow-capped mountains, woodland scenery, and sprigs of holly nestled in bridal buns are just a few of the many reasons to adore winter weddings. If it’s cold-weather concerns that are putting a damper on your snowy nuptial dreams, these 10 celebrity winter “I dos” will chill your fears in a snap. Keep scrolling and start dreaming of wintry tones, cozy vibes, and wedded bliss.

I feel so lucky that I got to marry my best friend!! @justinverlander Thank you to our family and friends for making this weekend so fun and magical! ❤️❤️❤️ (📸 @ktmerry )

1. Kate Upton and Justin Verlander: The model-turned-actress tied the knot in a luxe Italian setting in November 2017. As she demonstrates, long-sleeved lace bodices are a major fashion perk of getting hitched in chilly weather.

2. Katherine Heigl and Josh Kelley: Back in December 2007, Heigl wed her musician hubby in Utah. They reportedly said their vows as snow fell lightly outside — talk about romantic!

3. Solange Knowles and Alan Ferguson: Queen Bey’s artsy younger sister became a Mrs. in a New Orleans ceremony in November 2014. The pair rode up on white bicycles before the bride donned this winter-approps dress and cape.

"The only true currency in this bankrupt world is what you share with someone else when you’re uncool" -- Lester Bangs. When you're born, if you're lucky you have a family of blood. When you grow up. If you're lucky and loving you have a family by choice. Thank you to the man of honor, the maid of honor and the best man and best women who made our marriage, relationship and beautiful life possible. 📸 by the awesome @maxwanger #fortday2016 #HOWL

4. Troian Bellisario and Patrick Adams: The PLL-alum festivities brought our chilly boho-bride dreams to life in December 2016 when Bellisario sported a spiky crown of crystals and snuggled in a comfy cardi post-ceremony.

5. Witney Carson and Carson McAllister:DWTS‘ Carson said “I do” to her high school sweetheart with a mountain-filled wonderland as the backdrop in January 2016. The wintry perfection was completed by a hot cocoa station at the reception.

6. Daisy Fuentes and Richard Marx: Getting chilled to the bone is worth it for epic nuptial photos like this snap. The actress and her hubs got hitched in a December 2016 ceremony in Aspen, Colorado with plenty of magical snow.

To the best man in the whole world, You have given me everything I have truly wanted. Brought me up when I was down, supported and stood by me. You've shown me the meaning of love and partnership and I am eternally grateful and honored to have you in my life. Thank you for our beautiful daughter. I cannot begin to express my joy in looking forward to our future. Bring on #2017 Happy 3 Year Anniversary. <3

A post shared by Christy Carlson Romano (@thechristycarlsonromano) on Dec 31, 2016 at 9:37am PST

8. Christy Carlson Romano and Brendan Rooney: The Disney star’s NYE knot-tying featured lots of DIY touches that fully embraced the winter theme, from Romano’s gorgeous, icy hair piece to the smells and tastes of the bash.

9. Genevieve Cortese and Jared Padalecki: The former Supernatural costars wed in a Sun Valley, Idaho ceremony with rustic touches, an outdoorsy feel, and a sprinkle of snowfall to complete their fairy-tale wedding.

Congrats to Big Bang Theory star Kaley Cuoco @normancook . She & her Tennis player beau @ryansweething tied the knot this weekend. The bride wore a sweet rose pink dress by @verawanggang You can tell it was a beautiful yet playful wedding!