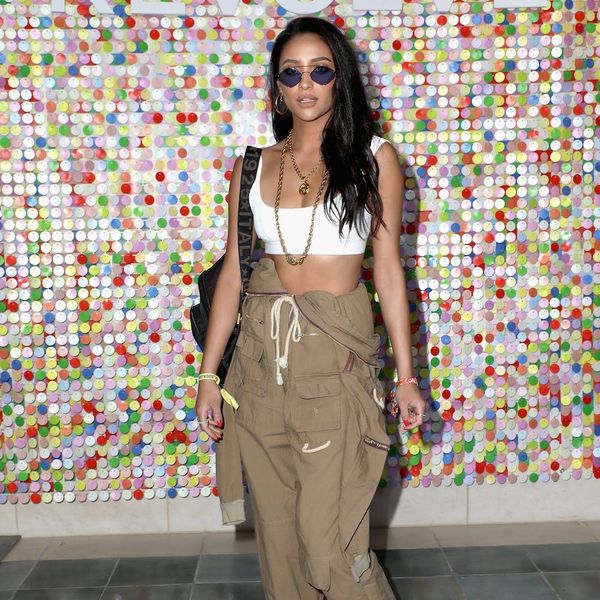 A good jumpsuit takes the hassle out of planning an outfit — it’s an easy, stylish, all-in-one package, after all! However, in recent years, trendsetters have been taking the same old one-piece and mixing it up in a slew of new ways. From movie premieres to Coachella, here are five celebs who have reinvented jumpsuit-appropriate dressing that we want to copy.

2. Izabel Goulart’s Billowing Silhouette: At the Cannes Film Festival 2018, the Victoria’s Secret model took a stroll down the promenade in a striking Valentino jumpsuit. The vibrant crimson pantsuit featured a dramatic wide-legged shape and, most importantly, pockets. (Photo via Iconic/GC Images)

3. Shay Mitchell’s Jumpsuit as Pants: Someone just crown Shay Mitchell the Queen of Coachella Style already, because the Pretty Little Liars alum nails it year after year. This year, she attended the Revolve pool party wearing a khaki color one-and-done as — wait for it — bottoms. She paired it with a teeny white crop top, black sunnies, and some gold chains, ‘cuz Coachella. (Photo via Roger Kisby/Getty Images for REVOLVE)

4. Kylie Jenner’s Pants as Jumpsuits: Stormi’s mom stepped out in a look that was the perfect antithesis of Mitchell’s in that it was a pair of pants that she wore as a romper. Well, to be fair the $685 Y/Project stunners are convertible and feature not one, but two cinched waistbands. Talk about high-waisted pants! (Photo via Clickpix/Bauer-Griffin/GC Images)

5. Blake Lively’s Red-Carpet Jumpsuit: Lively attended her hubby Ryan Reynolds’ Deadpool 2 movie premiere in an ensemble that paid homage to his superhero alter ego. The actress’ strapless, sequined Brandon Maxwell jumpsuit was black with an exaggerated maroon sash. She also had fun with her accessories, carrying a playful clutch with “Party Mix” and “Chill Beats” embroidered on both sides. (Photo via Bennett Raglin/WireImage)

Kimberly Wang
Kimberly Wang writes about all things pop culture, tech, style, and beauty. She's a Bay Area transplant and has an MFA in Creative Writing from Columbia University. On a sunny New York day, you can find her hanging out with her mini schnauzer Isabelle Jellybean on a blanket in Central Park.
Celebrity Style
Celeb Style
Celebrity Style
More From Celeb Style