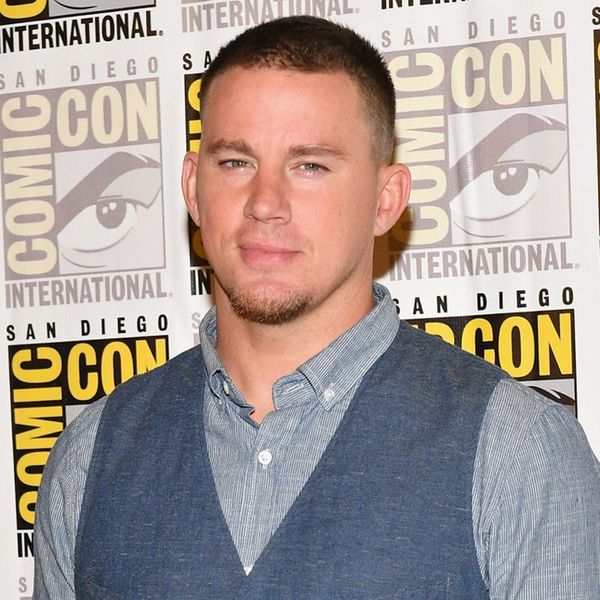 Channing Tatum isn’t shy about being a super-proud parent (and husband) with wife Jenna Dewan Tatum, but he just proved it once again on national TV. Instead of dressing in head-to-toe designer, he took the opportunity to show off one of his daughter’s art projects. You might not even notice from far away, but he appeared on Jimmy Kimmel Live Monday night with a very special, one-of-a-kind tie.

Tatum was promoting his new movie Logan Lucky on the late-night talk show, and as soon as he sat down, Jimmy Kimmel pointed out his unique neckwear. “What’s going on with your tie?” the host asked.

Tatum teased, “This is a new artist in town. Her name is ET.” He then laughed and explained, “It’s just my daughter. She made me a tie.” The one-of-a-kind accessory was the product of a school project, but Tatum revealed that it’s not the only item of clothing of his that his four-year-old Everly has painted. He has four or five pairs of Converse sneakers that she’s gotten her paintbrush on. When Kimmel asked if he drew the line when she gets to his suits, Tatum said he’d even let her paint those. Swoon.

“It’s like a talking piece,” he said of the wearable art. “You don’t have to talk about yourself, you can just be like, ‘Yeah, the tie.'”

Watch his interview with Kimmel below.

What do you think of Tatum’s ultimate dad fashion choice? Tell us if you’d do the same thing @BritandCo!

Elyse Roth
Elyse Roth is a freelance writer and editor who is a midwestern transplant in NYC. She loves to explore the city, plus you can find her at a Broadway show or the ballet usually once a week. When she's not finding things to do in New York, she's thinking about where she can travel next. She's combined her love for food and TV into a blog where she makes food eaten on her favorite TV shows at tvdinnerblog.com.
Celeb Style