‘Chilling Adventures of Sabrina’ Is Going ‘Full Witch’ for Part 2: Watch the Trailer 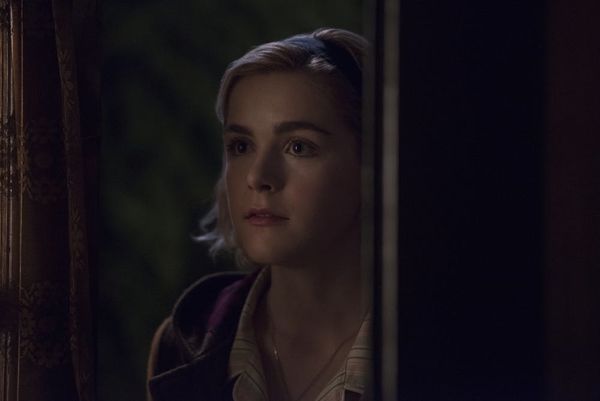 Good news, mortals: Netflix just revealed the premiere date and trailer for part two of Chilling Adventures of Sabrina, and it looks like our favorite teenage witch is embracing her dark side.

The 10 new episodes, set to premiere on Netflix on Friday, April 5, promise to show us a different side of Sabrina (Kiernan Shipka). “Since when do you wear black?” Aunt Zelda says to her niece as she comes to the breakfast table decked out in her finest dark ‘fit. “Trying to be edgy?”

Sabrina, not only in a darker wardrobe but sporting the updated platinum, wavy bob she got at the end of season 1, cheerfully responds, “It’s a new year!”

The short teaser also shows a glimpse of Sabrina and Nick (Gavin Leatherwood) getting cozy, as Harvey (Ross Lynch) and Roz (Jaz Sinclair) grow close, too. Meanwhile, the Weird Sisters seem to be up to their usual sinister ways, Madam Satan looks more devilish than ever — and Sabrina is at the center of it all.

In part two of the adaptation, our heroine “navigates the Path of Night while holding on tight to her friends who walk the Path of Light,” according to Netflix.

Chilling Adventures of Sabrina, part two, hits Netflix on April 5, but you don’t have to wait until spring for some new Sabrina: A special holiday episode, called “A Midwinter’s Tale,” will be released on Netflix on December 14.

What did you think of the Chilling Adventures of Sabrina part two teaser? Let us know @BritandCo!