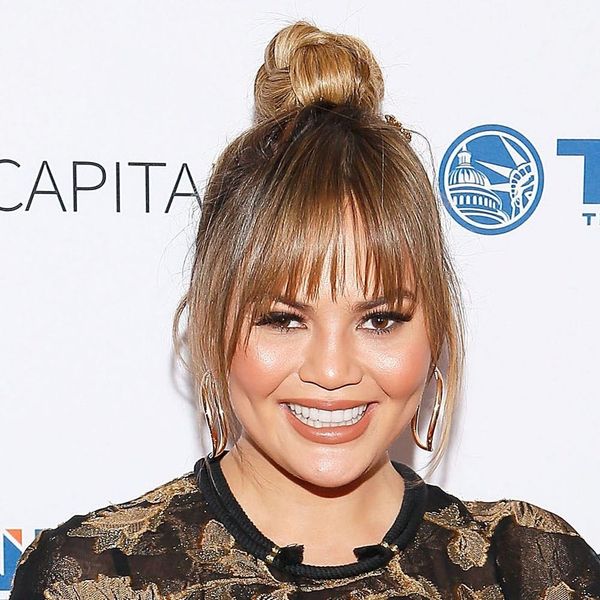 Chrissy Teigen’s got that pregnancy glow! After making the joyful announcement last week that she and hubby John Legend would soon be giving little Luna a brother or sister, the soon-to-be mommy of two stepped out for her first red carpet appearance looking positively radiant.

While Teigen was at the Smithsonian magazine’s 2017 American Ingenuity Awards to show support for her husband, who was an honoree at the event, the Lip Sync Battle host looked positively aglow as she posed for pics on the red carpet.

The Twitter queen swathed her barely-there bump in a long, darkly romantic gown in hues of wine, gold, and black. She topped the look off with plenty of finger bling, a black and gold clutch, and an elegant topknot — all the better to show off the brand new bangs she recently got thanks to her Twitter followers.

Taking in the artwork at the National Portrait Gallery, where the event was held, the model seemed right at home, lounging on a couch in her formalwear with an expression of sheer bliss.

We can’t wait to see what other maternity looks she’ll have in store for us this season!

What do you think of Chrissy’s first post-baby announcement look? Share with us @BritandCo.

Nicole Briese
Nicole is the weekend editor for Brit + Co who loves bringing you all the latest buzz. When she's not busy typing away into the wee hours, you can usually find her canoodling with her fur babies, rooting around in a bookstore, or rocking out at a concert of some sort (Guns N' Roses forever!). Check out all her latest musings and past work at nicolebjean.com.
Celebrities
Celeb Style
Celebrities Celebrity Baby Celebrity Style Chrissy Teigen
More From Celeb Style