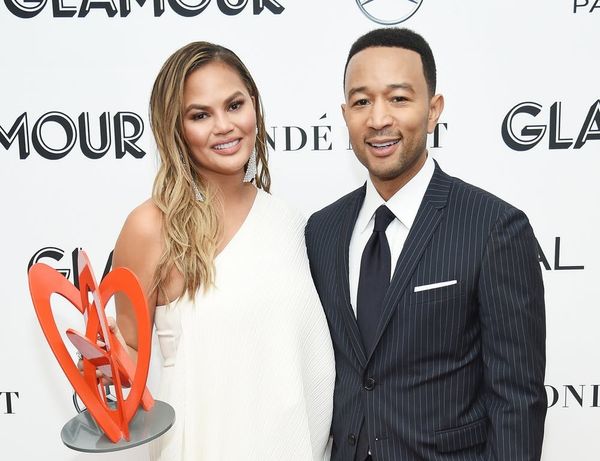 Chrissy Teigen and John Legend love to tease and troll each other, but at Monday night’s Glamour 2018 Women of the Year Awards, they both cried as they honored each other in a pair of emotional speeches.

Legend took the stage first to introduce his wife, who was one of the night’s honorees. “Hi, everyone. I’m John. Also known as Chrissy Teigen’s trophy husband,” the singer joked in his intro. “I have a career in the music business, but we all know who the star of the family is. She’s the heart and soul of the family too.”

Legend went on to describe how even his fans have become bigger fans of Teigen over the years, thanks in large part to her always being her unfiltered, authentic self on social media. “People love her honesty. Her humor. Her beauty and style,” he continued. “Her passion for food. Her sense of adventure and fun. And they love her big, beautiful heart. The heart she wears on her sleeve. She inspires so many people and so many women.”

After touching briefly on Teigen’s social media habits, which make headlines pretty much every week, he told a story that she referenced in her Glamour profile. “She talked about a time when we were at this big event and she was crying in a dressing room because she felt so overwhelmed by the illustrious company she was in. We were celebrating the Time 100 and she felt like she didn’t belong. How could she be worthy of the likes of Oprah, Christine Lagarde, Michelle Obama?” he said, fighting back tears. “Well, I’m here to say that you belong here. I think it has become very clear to Glamour magazine and to many millions of people around the world that you are more than worthy of this honor tonight.”

"You are more than worthy of this honor tonight." A very emotional #JohnLegend cried while presenting #ChrissyTeigen with her #GlamourWOTY award last night. Tap the #linkinbio to watch his full tribute—and restore your faith in true love. 💕

As Teigen came out to accept her award, she spoke about what the honor meant to her after years of feeling like she didn’t belong in the entertainment industry. She also, of course, returned her husband’s affectionate words.

“I joke about it a lot,” she said as she fought back tears, “but I truly have the most incredible husband on the planet.” The camera then showed Legend, still standing side stage, also crying.

In true Teigen fashion, though, it wasn’t long before she broke and went back to her trolling ways. “This is so sappy, I’m sorry. I hate you, John. I really do,” she joked, as he and the crowd laughed.

What do you think of John and Chrissy’s speeches to each other? Let us know @BritandCo.