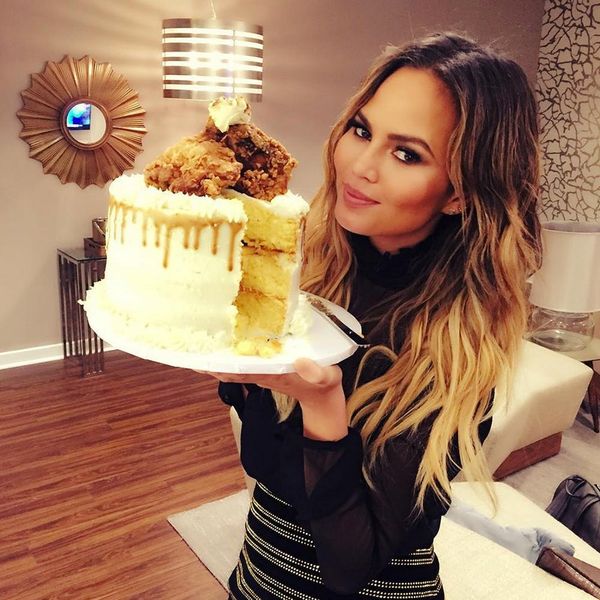 One mention of the word “cake” and we’re basically salivating over visions of buttercream frosting, sprinkles and maybe even some strawberry filling. But what if you took one of the most popular desserts and transformed it into a main course? Sounds crazy, right? Well apparently, Chrissy Teigen doesn’t think so.

The model-turned-TV personality took to Instagram yesterday to share a photo of her with a cake that pretty much defies everything we know to be true about the classic dessert. She captioned her photo, “This cake!! Mashed potatoes, gravy, fried chicken, cornbread and mac and cheese!! And it’s not just pretty, it’s seriously delicious! Thank you @breescakes!!!”

The baker behind this masterpiece is Bree Miller of Bree’s Cakes in Los Angeles. She tells us that her carbolicious creation all started with a dare. She says, “Long story short, I actually made this cake back in April for my family. I’ve been trying to come up with different kinds of savory cakes and so my friend had sent me a photo of this casserole that was frosted with mashed potatoes and told me, ‘I challenge you to make this look like a cake.’ I said, ‘challenge accepted’ and posted a photo on my Instagram and it went viral from there.” She goes onto explain that LA-based rapper The Game saw the photo and was the first person to actually buy one from her. She says, “He told me ‘You need to add more things to it.’ So I decided to add candied yams and mac and cheese.” Not surprisingly, the savory cake went viral again after The Game shared a photo on his Instagram.

While the cake has an obvious southern food kick, we can’t help but think about how fun this would be to make for Thanksgiving. If you’re outside of the LA area or want to DIY your own version, Bree has one major pro tip: Spread the mashed potato frosting while it’s still scorching hot. She says, “once it gets colder or room temperature it’s nearly impossible. You have to work really fast, but other than it works just like a normal cake would.” Oh, and she does have one final, very important piece of advice: “Don’t over-fry your chicken!” Duly noted, Bree.

Would you make this cake on Thanksgiving? Share with us in the comments below.

(Photos via @chrissyteigen and @breescakes)

Cortney Clift
Cortney is the senior writer and special projects editor at Brit + Co. She typically covers topics related to women's issues, politics, and lifestyle. When she's not buried behind her computer you'll find her exploring New York City or planning her next big adventure.
Food
The Conversation