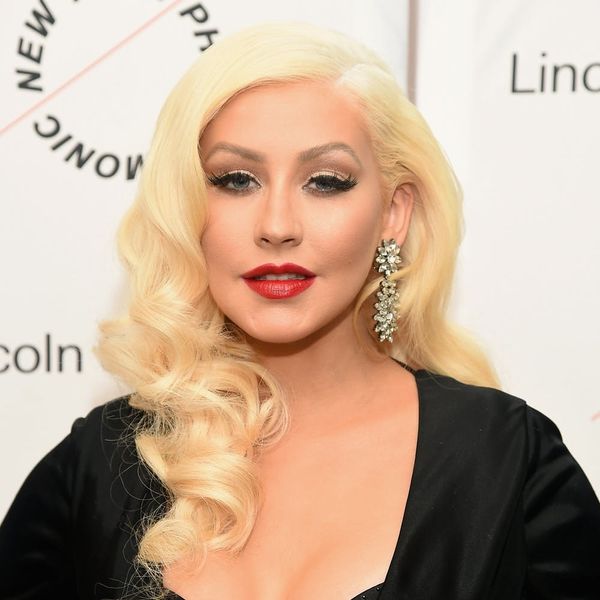 Christina Aguilera might be busy setting style trends (like that stunning lavender pierced braid), but we must never forget the gal is a singer first and foremost — I mean, her voice is cray. No surprise here, but The Voice judge is also uber competitive. During her latest visit to Ellen, Xtina showed off her pipes along with her Head’s Up skills while playing a round of the popular app game with the talk show host. Drawing on her knowledge of pop music and her top-notch vocals, girlfriend was just put to the test and totally NAILED it.

The 35-year-old mom of two was looking stylish during her appearance: She had her hair styled in a super straight platinum blonde lob, sported dark lips with a matching cat eye and wore a white blouse and high-waisted pencil skirt.

When Ellen grabbed the iPad and started flipping, the pop singer was barely phased when Whitney Houston popped up and was totally on-point with Madonna, Beyoncé and Katy Perry. She mumbled her way through a little “work, work, work” before running out of time. Spoiler: She got all of ’em.

Check out which songs she nailed (and which she missed) in the video below.

How would you have done in this round of Head’s Up? Tweet us @BritandCo!

Desiree O
Desirée O is a ‘Professional Bohemian’ who loves anything and everything related to the arts, entertainment, and pop culture. She ADORES being a ‘Newsy’ for Brit + Co, covering all of the latest tidbits of awesomeness that you want to read about. When she’s not writing, she’s either making messy art, going on long adventurous walks with her camera, or poking around over at bohemianizm (http://www.bohemianizm.com/). You can find out about Desirée O and her work at http://DesireeO.com/ or follow her on Twitter @DesireeO.
Games
Music
Games Music