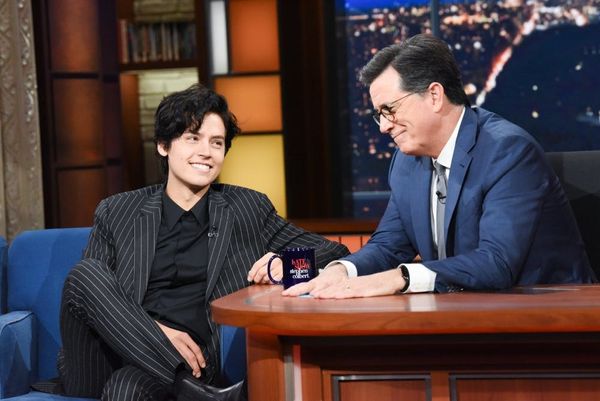 Cole Sprouse has risen to heartthrob status as Jughead on the CW’s Riverdale, but he started in Hollywood as a child actor. One of his earliest high-profile roles was as Ross Gellar’s son, Ben, on Friends, where Sprouse developed a major crush on one of his costars at the time.

Appearing on The Late Show With Stephen Colbert on Thursday, November 1, the actor was shown a series of photos from his younger days in showbiz. “What do you remember about this time?” Colbert asked as he showed Sprouse a picture from one of his first solo acting gigs on the set of Friends. “Do you remember this moment right here?”

In the photo, Sprouse is young, blonde, and sharing a smile with Jennifer Aniston, who played Rachel Green in the iconic sitcom.

“That’s when I fell in love with her,” Sprouse replied. Colbert then asked the actor if he had a crush on Aniston. “Didn’t everybody?!” he answered.

“I remember feeling so intimidated by my crush on her that I completely blanked and forgot every single one of my lines and she just stared at me and was waiting,” Sprouse recalled. “One of the crew members, it was one of the camera men — you guys know who you are — goes, ‘That little boy’s got a crush!’ [It] broke me.”

Of course, Sprouse has had many roles since his stint on Friends, and he is now happily in a relationship with his Riverdale costar Lili Reinhart. He prefers to keep the current details of his love life out of the spotlight, however, and has said in the past that he doesn’t want to let people feel entitled to information about his private life.

What do you think of Cole’s adorable admission? Let us know @BritandCo!