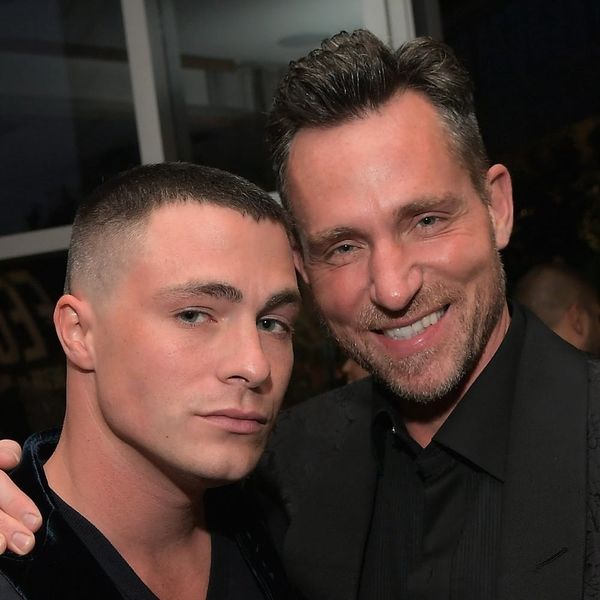 After not one, but two magical engagements (complete with a Cher cameo!), we were expecting nothing short of pure extravagance from Arrow star Colton Haynes and Four Seasons Paris Artistic Director Jeff Leatham’s big day, and boy, did their star-studded ceremony deliver!

The 29-year-old Teen Wolf actor said “I do” to his 46-year-old beau over the weekend in a breathtaking wedding at the Palm Springs Hotel that looked like something out of a fairy tale.

Our first clue that these were no ordinary nuptials? It was officiated by none other than Kris Jenner!

She wasn’t the only celeb in attendance, either. Countless A-listers, including Modern Family stars Jesse Tyler Ferguson and Sofia Vergara, Leslie Grossman, Joe Manganiello, Melanie Griffith (who made sure to snap a selfie with the officiant), Lisa Rinna, Chelsea Clinton, Teen Wolf‘s Dylan O’Brien, Arrow‘s Emily Rickards, Carrie Fisher’s daughter Billie Lourd, and American Horror Story’s Cheyenne Jackson were among the 120 guests who showed up to help the couple celebrate.

Everyone in attendance wore black and white to adhere to the grooms’ unique theme, which Leatham described to People as the equivalent of “Cher meets a Guns ‘N Roses video.” The artistic director actually did most of the decorating himself, but admitted that wasn’t the most important aspect. “More than the flowers and decorations, it’s really about everyone coming together and everyone you love being with in the same room,” he told the outlet. “That was the most important thing for us.”

Congrats @coltonlhaynes & @jeffleatham. We love you so much! Welcome to the married club. ❤️

As for the newlyweds themselves, they were perfectly matched in white tuxedo jackets, black pants, and black bow ties, as they exchanged their vows in an outdoor ceremony that was illuminated by hundreds of candles hung up in trees and surrounded by red roses.

After the vows, it was time for dinner, where guests dined at tables decked out with stunning crystalware, white flower bouquets, and pretty hand-written name cards. On the menu was a butternut squash risotto with baby veggies and aged Parmesan to start, followed by a chicken breast with fingerling potatoes, root veggies and a mushroom jus, and to top it all off, there was a mysterious voodoo rose for dessert. Yum!

From there, the beaming couple changed into matching black shirts and shared a gigantic piece of black wedding cake using nothing but their hands before dancing the night away. Talk about cuteness overload!

What do you think of Colton and Jeff’s wedding? Tweet us @BritandCo.