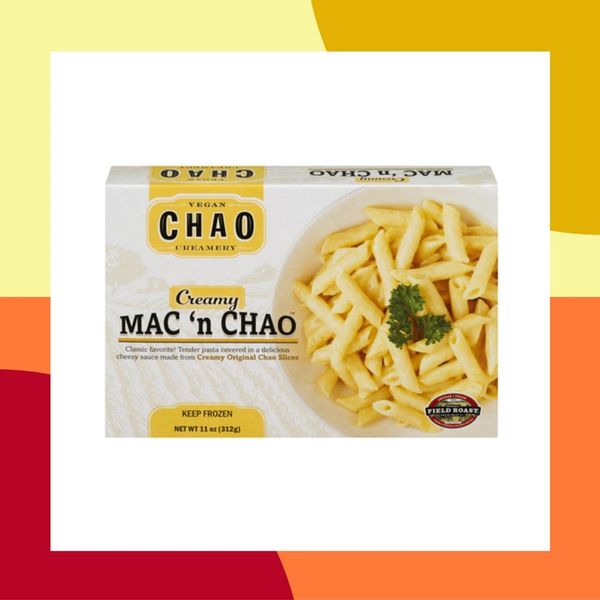 When you give up dairy, it can feel like you no longer get to enjoy any of your favorite comfort foods, and what’s life without a helping of mac and cheese to comfort you when the going gets tough? It can be hard to adjust, yes, but we’re happy to report that these days vegan mac and cheese abounds, and you don’t even have to make it yourself. We tried six different brands of vegan macaroni and cheese all told, and it was quite the gustatory adventure. From frozen to dried, powdered “cheese” to liquid, there was a lot to digest. At the end of the day, these are the three brands that we recommend. They all feature a balance of creamy sauce, tender but not mushy noodles, and a cheesy flavor that doesn’t taste too artificial or funky. Get your spoon ready and dig in!

Field Roast’s Chao is one of our favorite non-dairy cheeses. It has a smooth texture and actually melts, and it’s what gives this vegan mac and cheese such a creamy texture. It’s made from fermented Chao tofu, coconut oil, and potato starch (the trio that’s responsible for the texture), and seasoned with nutritional yeast (the go-to vegan “cheese” flavor), hot sauce, and spices. This mac and cheese gets baked or microwaved from frozen (we microwaved it) and results in silky noodles covered in a smooth, not separated or greasy, non-dairy sauce. We’d happily snack on this any day of the week.

A lot of vegans have a love-hate relationship with Daiya cheese. For awhile it was one of the only shredded vegan cheeses on the market that actually melted, and it’s often the non-dairy cheese of choice for pizza chains and the like that have vegan options. However, Daiya’s deluxe mac and cheese, which is closer to Velveeta than the classic blue box of Kraft, is on another level. This option comes with dried brown rice pasta in a box and cheese sauce in a pouch that you squeeze over the pasta when it’s done. You can expect a creamy sauce that coats every bite of pasta with nostalgic processed-cheese-like flavor too. We mean this in a good way of course.

Here is another frozen entrée that simply requires popping in the microwave for a few minutes. It cooks up exactly as it shows on the package. A closer look at the ingredients list reveals that Amy’s uses Daiya’s creamy vegan cheeze sauce in this dish, but it tastes a little different since Amy’s adds nutritional yeast and mustard powder to it’s sauce. It also has a slightly different texture due to the fact that it’s frozen, not boxed. Fun fact: Even those who aren’t big fans of “fake cheese” will enjoy this version.
From Your Site Articles
Justina Huddleston
Justina Huddleston is a food writer living in Los Angeles. When she's not busy writing, she spends her time in the kitchen creating both virtuous and decidedly junky vegan food. Buffalo chickpea pizza, anyone? She's also been known to eat a plain block of tofu or beans straight out of the can for lunch, but somehow those culinary adventures don't make it to her Instagram. You can follow Justina on Twitter or see what's cooking in her kitchen on her blog, A Life of Little Pleasures.
Grocery Shopping
Food News
Grocery Shopping
The Conversation