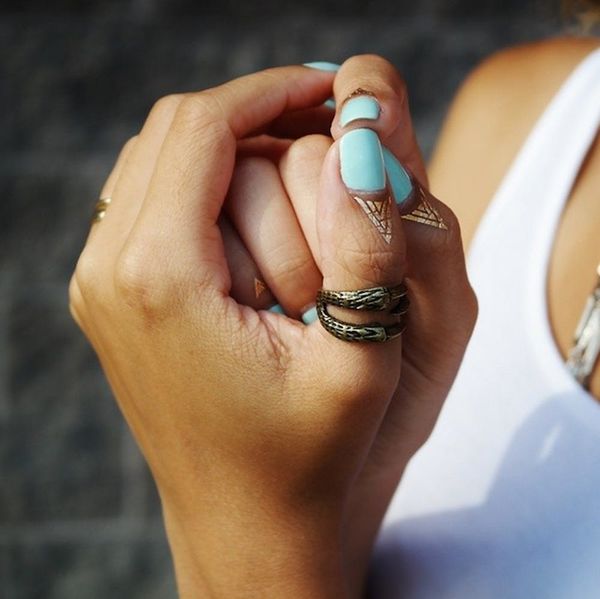 When it comes to manicures, cuticles kind of tend to be the problem child. Even if the rest of your manicure is looking great, there’s always that one that’s acting up. And unless you treat it with caution, you’re in for a world of trouble. But now, it looks as though the long-neglected cuticle is finally the star of the show. Introducing: cuticle art.

The new trend, helmed mostly by the company Rad Nails, is essentially temporary tattoos designed for your cuticles. Unlike most nail art, this new look takes things off the actual nail bed and onto the finger. Rad Nails offers a collection of “cuticle tattoos,” which can be worn on either the skin or on the nail – or maybe even somewhere in between.

Chrissy Mahlmeister, founder and creator of Rad Nails, told SheKnows, “We’re so used to seeing the designs stay within the tiny borders of our nails, but I wanted to take it a step further and expand the idea of what nail art can actually be. One day, I was playing with some nail polish, and I thought it would be cool if the drips actually extended beneath the nail to create the illusion of paint dripping onto my skin. I tried out some different ways to achieve this look and eventually ended up with temporary tattoos that can be applied to both the skin and nails.”

If you’re not so sure about the idea, start with the “Another Round Tattoos,” which look sort of like a crescent moon. You can place these under your nail bed or ease into it by placing them right at the base. Then, take it to the next level with some graphic triangle tats. When you’ve totally mastered this whole cuticle art thing, go for a super dramatic mani with the “Drippy, Bro” option.

Pair these with some negative space nail art and we can tell you right now, you’ll definitely have the coolest mani on the block.

Would you try these cuticle tattoos? Share your thoughts with us in the comments below.

(Photos via Beautylish and @emmeseecole)