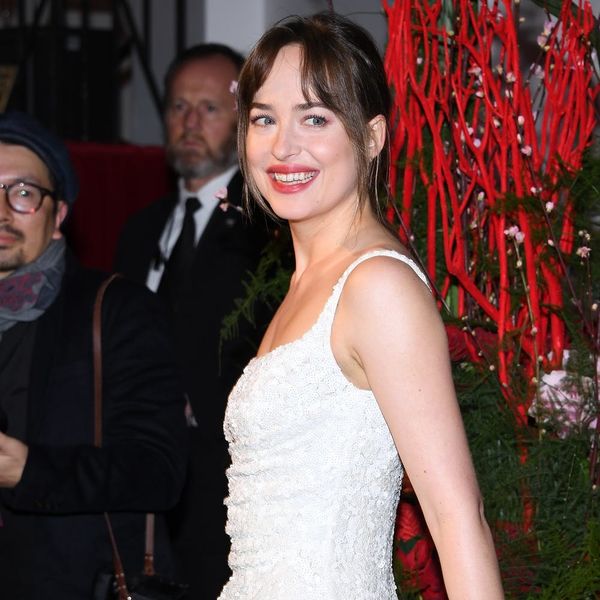 The much-anticipated conclusion to EL James’ steamy trilogy, Fifty Shades Freed, is hitting theaters now, which means fans of the series will finally get to see how Ana and Christian’s story ends. Actress Dakota Johnson appeared to give a nod to her character’s newly married status at the movie’s Paris premiere with her outfit choice of dazzling white.

The 28-year-old star stepped out on the red carpet in the City of Love (how fitting!) wearing a floor-length, custom Prada ivory silk gown covered in tiny sequins. The dress looked like something that could also be worn down the aisle — appropriate for one of the movie’s major plot points, in which Miss Steele finally becomes Mrs. Grey.

While Ana’s wedding dress was created by designer Monique Lhuillier, Johnson’s outfit for the evening was a custom Prada piece, according to Vogue. Johnson paired her bridal look with minimal jewelry, sticking to a pair of dainty earrings and a sweet cocktail rings. Her makeup took a less-is-more approach as well with her eyes complimented by a subtle pinkish-brown shadow and her lips smudged with a soft rose hue. The young starlet’s hair was pulled back into a simple updo with her bangs left framing her face. Polishing off the killer ensemble was a pair of simple silver heels.

Miss Johnson will see you now.

What do you think of Dakota Johnson’s Fity Shades outfit? Are you going to see the movie? Tell us @BritandCo!

Shea Lignitz
Shea can be found in the nearest bookstore or brewery, exploring the great outdoors, or blasting Led Zeppelin. She grew up in the cold and rain of Northern California's redwoods but is currently wandering around Texas.
Celebrity Style
Celeb Style
Celebrity Style Celebrity Wedding Red Carpet
More From Celeb Style