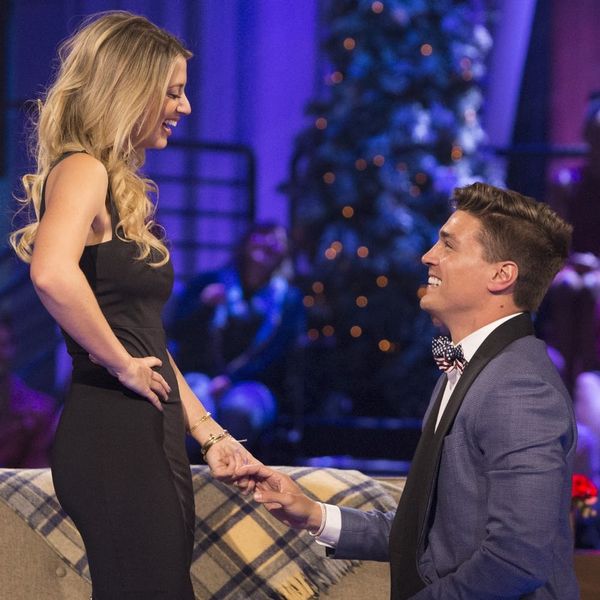 Dean Unglert and Lesley Murphy were the first couple to emerge from the Bachelor: Winter Games spinoff, and while they weren’t the ones who got engaged on the World Tells All finale, they did manage to pull off a pretty cute — and unconventional — proposal of their own.

Getting down on one knee, Unglert presented Murphy with a small box that didn’t contain a ring — but it did contain a key to his house. “Went for the gold. Took home a different medal instead,” Murphy captioned a photo of the fake-out on Instagram. She accepted, and the pair excitedly celebrated their relationship milestone.

Murphy originally appeared on TheBachelor season 17 with Sean Lowe, and Unglert, a Bachelorette season 13 alum, appeared (and caused plenty of drama) on the most recent season of Bachelor In Paradise. The couple were runners-up on Bachelor: Winter Games.

Murphy and Unglert were first linked before the Bachelor: Winter Games premiere when they were spotted taking in the Sundance Film Festival Park City, Utah, together. Their chemistry came easily on the show, and Unglert told ET that their connection was due in large part to the fact that both his mother and Murphy have undergone double mastectomies.

“Seeing the way [my mom] was able to be optimistic and positive through that experience…and then reliving it with Lesley and seeing a lot of the similar characteristics of the positivity and the optimism and just the courage and all that [was amazing],” he said. “I think that we did bond early on because of that, but I think that we have grown so much closer for so many other things beyond that as well.”

Were you fooled by Dean’s fake proposal? Let us know @BritandCo!