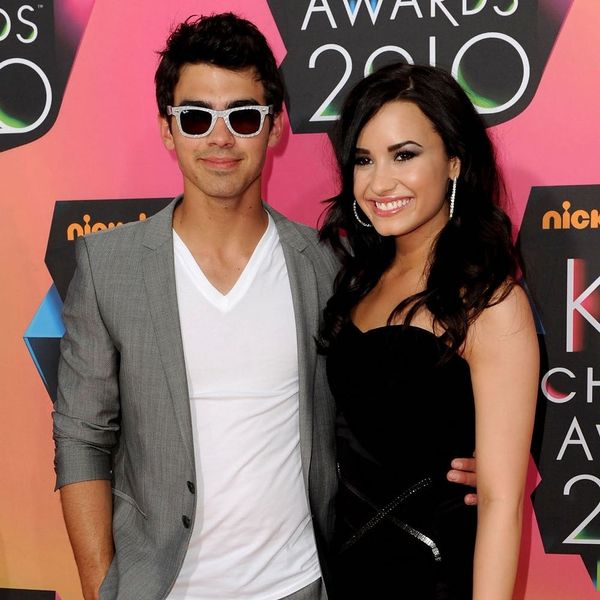 These days, Demi Lovato’s fans are all about trying to figure out her relationship with Nick Jonas, and whether her song “Ruin the Friendship” was inspired by him. But long before that “are they or aren’t they” situation, Lovato had eyes for another Jonas brother. And while she’s tight-lipped about her bond with Nick, she’s happy to reminisce about her long-ago romance with his older sibling Joe.

As seen in a video posted to her YouTube channel this week, the 25-year-old singer sat down with two of her closest friends to revisit her past. “Things could get really weird or interesting, I’m not really sure,” she begins the clip by way of introduction. “Probably embarrassing, but we’ll find out.”

They start the walk down memory lane with her 2000 appearance at the Mini Miss Preliminaries for the Texas State Cinderella Pageant, and Lovato can’t help but notice that she’s wearing a dress that looks remarkably similar to her pageant frock. The clip is adorable, naturally.

Things really get interesting, though, when they roll tape on Disney’s Camp Rock, the movie on which Lovato met the Jonas brothers. As they watch, her friend Matthew Scott asks if she had a crush on Joe the whole time, to which she immediately replies, “Oh, yeah!”

When she gets to the clip of her character, Mitchie, approaching Joe’s character, Shane, by the lake, she exclaims, “Oh my god, wait — this moment, I freakin’ fell in love with him. In real life!” Scott compliments her acting, but Lovato admits, “I wasn’t acting much.”

She also recalls their first kiss, which happened on camera. And, yes, you get to see the clip of the kiss — along with the singer’s adorable reaction to seeing the smooch all these years later.

Lovato and Joe Jonas weren’t actually a couple when they filmed Camp Rock, but they dated briefly in 2010 after finishing up Camp Rock 2: The Final Jam. In recent years, though, she’s been closer with Nick. They toured together in 2016 and even started their own record label.

Did you like Demi Lovato and Joe Jonas together in Camp Rock? Let us know @BritandCo!