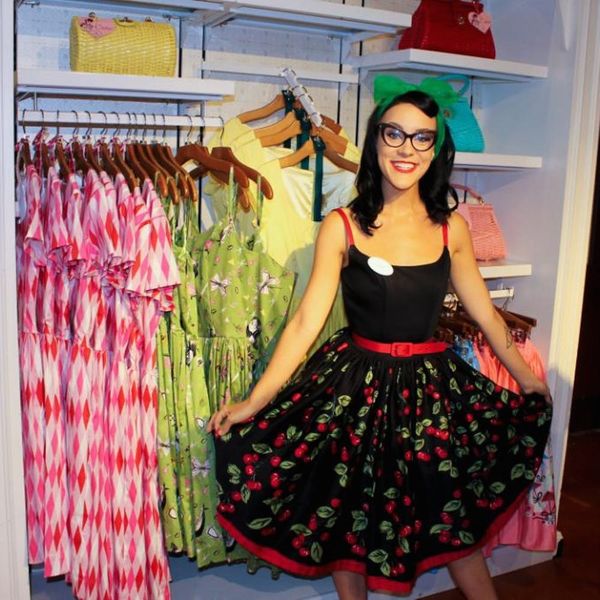 Walt Disney World has just made it a heck of a lot easier for fans to go Disneybounding (AKA dressing up in garb that gives off character vibes), particularly for those with a flair for the nostalgic. The House of Mouse has officially opened The Dress Shop, a new go-to destination for adorbs dresses and accessories inspired by all things Disney, located right on Cherry Tree Lane. Eeeeee!

Rather than selling full-on costumes, The Dress Shop pays tribute to the park’s beloved characters with iconic, retro-looking pieces that invoke their spirit, such as a red and white polka dot dress that Minnie Mouse herself could have worn. And it’s not just the characters getting a nod: You can expect to see prints inspired by the likes of Walt Disney’s Enchanted Tiki Room and its classic ”It’s a Small World” and “Tower of Terror” rides too.

Pieces shown have some serious old-school charm, with pinup girl halter cuts, flared tulle skirts that borrow from classic ’40s and ’50s designs, and uber-cute prints. “The dress styles are classic in design and contain incredible little details,” merchandiser Donna Snow said. “Yet all the styles have modern fits which make them wonderful.”

We love this new Belle dress and Beauty and the Beast themed bag that arrived at The Dress Shop on Cherry Tree Lane yesterday! pic.twitter.com/2b1RcKX7uE

As the mastermind behind The Dress Shop, Snow revealed that it took about a year to put the entire collection together. Speaking with the Disney Parks blog, she put emphasis on the fact that “these items aren’t costumes, rather the collection contains perfect outfits for guests who have a passion for Disney style.”

Today is the grand opening of The Dress shop at Cherry Tree Lane at Marketplace Co-Op! This new boutique features a whimsical collection of #dresses inspired by popular design trends and nods to Disney attractions and characters. Special guest, Justin J., founder of @dapperday will be making appearances and @pinupgirlclothing will be here this weekend through April 2 with a special trunk show of #vintage apparel. 👗#DisneySprings #DapperDay #TheDressShop

It’s only been a few days since the boutique’s grand opening and already some of the pieces (many of the dresses retail for $100 and up) are sold out (Disney has promised to eventually make them available for sale online too).

First Disney-inspired swimwear and princess lingerie, now this? We’re in Disney Heaven! We’ll take one of each, please, starting with that cutie orange pattern.

Do you want to add some of The Dress Shop’s pieces to your collection? Tweet us @BritandCo.

Barbara Pavone
Barbara Pavone is a pop culture-obsessed writer based in beautiful (but ridiculously cold) Montreal, Canada. When she's not working, she's sipping on a Pimm's Cup and daydreaming about her celebrity hero, Saint West.
Disney
Style News
Disney retro