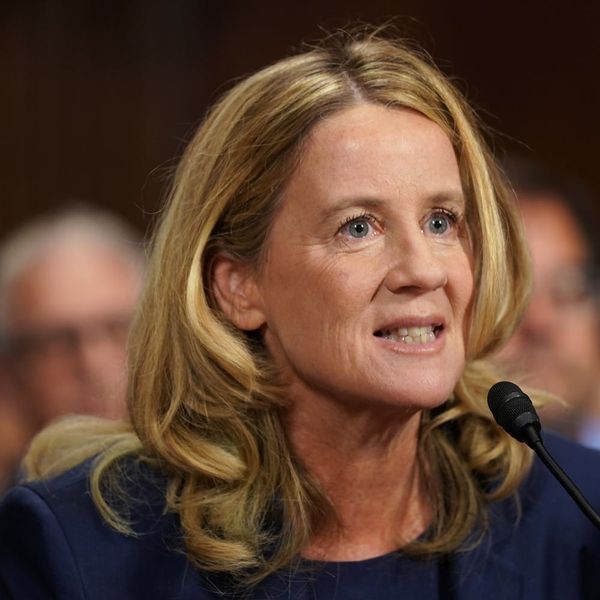 Dr. Christine Blasey Ford, the first of a few women to come forward and publicly accuse Supreme Court nominee Brett Kavanaugh of sexual misconduct, testified Thursday before the Senate Judiciary Committee. During her brave testimony, much of which she gave while choking back tears, Ford not only retold the story of what she alleges Kavanaugh did to her in high school and answered a litany of questions, but also gave everyone watching an invaluable lesson about the science of trauma.

A psychology professor who teaches at Palo Alto University and is a researcher for the Stanford University School of Medicine, Ford was able to speak authoritatively about how traumatic experiences change the brain and shape how memories are recorded.

“Indelible in the hippocampus is the laughter. The uproarious laughter between the two of them,” Ford said under oath, referring to Kavanaugh and his friend Mark Judge.

I would explain how trauma drives memory into the brain but Dr. Ford is CURRENTLY EXPLAINING THE EFFECT OF NEUROTRANSMITTERS ON THE HIPPOCAMPUS SO YEAH WHAT SHE SAID

Since she came forward, Ford has been met with a barrage of accusations that she couldn’t possibly remember what happened the night she says Kavanaugh attacked her. Republicans even ran with a baseless theory that it was really a Kavanaugh lookalike who assaulted Ford, and not Kavanaugh himself as Ford has repeatedly stated. But Ford, an expert in psychology, was able to explain exactly why she’s confident about her memory in scientific terms.

“How are you so sure that it was he?” Democratic California senator Dianne Feinstein asked Ford during the hearing.

“The same way that I’m sure that I’m talking to you right now, just basic memory functions, and also just the level of norepinephrine and epinephrine in the brain,” Ford responded. She then explained what happens in the brain during a traumatic event: “That neurotransmitter encodes memories into the hippocampus, and so the trauma-related experience then is kind of locked there whereas other details kind of drift.”

Ford said during her hearing that she is “100 percent” sure that it was Kavanaugh who allegedly assaulted her.

Asked how she can be certain it was Judge Kavanaugh, Dr. Ford explains that it is “just basic memory functions, and also, just the level of norepinephrine and the epinephrine in the brain that … encodes that neurotransmitter, encodes memories into the hippocampus.” pic.twitter.com/9TT2kArK7d

Though there is research that demonstrates how survivors are able to remember some aspects of traumatic events with great clarity, nobody can ever remember everything that happens during a particular event. Those lapses apply to traumatic memories, as well. Still, conservatives who defend Kavanaugh have repeatedly tried to poke holes in what they perceive to be important missing details in Ford’s story. Ford had an explanation for that, too.

The opportunity came when the prosecutor hired by Republicans to question Ford asked if her anxiety and PTSD could have been caused by something other than the alleged assault. Ford responded, “The etiology of anxiety and PTSD is multifactorial,” meaning there are many potential ways a person can come to have anxiety or PTSD, including biological elements and traumatic events, as Ford noted. She explained that the way survivors of assault respond to the event can vary from person to person.

Ford also spoke about experiencing a “fight or flight” response during the alleged attack. Fight or flight refers to the way the brain releases hormones (including epinephrine and cortisol) when it senses danger. These hormones get the body ready to either fight off or flee the danger.

As Ford explained how the alleged assault was physiologically processed by her brain, Democrats in the Committee thanked Ford for coming forward and speaking out, despite how scary the entire ordeal has been (Ford mentioned in her testimony that she was “terrified” to be there). Not only did Ford perform what she felt was her “civic duty” by sharing her experience before the committee, she also imparted important lessons about the trauma she, and so many other survivors, share.

Elizabeth King
Elizabeth King is a politics, history, and culture writer based in the Twin Cities. She is generally pretty cranky but still enjoys traveling, music from the early 2000's, and plotting the resistance. Feel free to say hi on Twitter at @ekingc or check out some of her work at www.elizabethcking.com.
Controversy
Current Events
Controversy Politics Science
More From Current Events