‘Dynasty’ Recap: Alexis Exposes Liam, But Is That Who He Really Is? 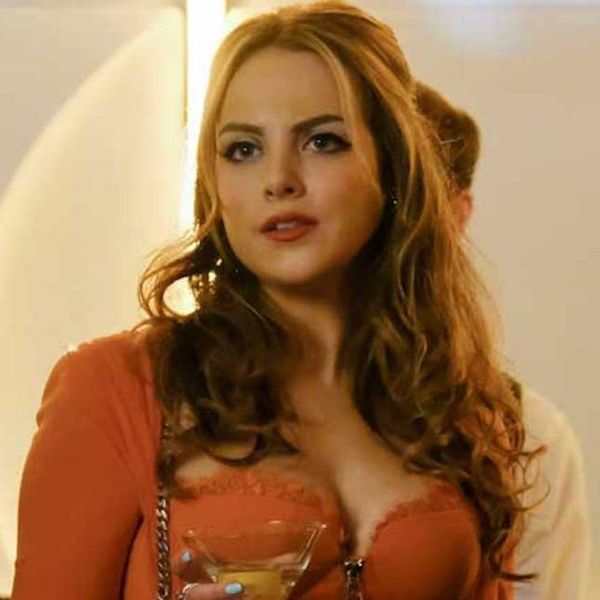 Things have certainly gotten interesting since Alexis (Nicollette Sheridan) came to town on Dynasty. On the latest episode, “Use or Be Used,” she sets her sights on blowing up Fallon’s (Elizabeth Gillies) life even more than she already has, all hidden behind the guise that she’s really trying to help Fallon. Uh huh.

Alexis’ main target is Liam (Adam Huber), Fallon’s new fake husband, for whom she is actually starting to have real feelings. Alexis thinks he’s a con artist. You know what I think? I think he might turn out to be Adam, the long-lost, kidnapped eldest Carrington child. I’ve had that thought more than once, but the way this show edited the previous lies, and also juxtaposed Liam’s secret with Steven (James Mackay) going to Texas to look for his brother, makes me very suspicious.

Liam’s big secret is that he’s Jack Ridley, a journalist who has received a huge advance to write a tell-all book about a dysfunctional wealthy family. Alexis tells Fallon and Fallon assumes his book deal is about the Carringtons. Turns out, it’s for a book about his own wealthy family, which he explains to Alexis because Fallon won’t take his calls. He gives Alexis his manuscript, but she burns it and lets Fallon go right on thinking that Liam was a fraud out to dig up her family’s skeletons.

Meanwhile, Alexis is also trying to clean up Jeff Colby (Sam Adegoke), who has spiraled a bit after the way Fallon duped him. I can’t quite figure out what her end game is here with Jeff, but I think everyone is going to be quite surprised when Liam turns out to be a Carrington, and that makes Fallon’s marriage to Jeff legal.

In fact, the way Alexis is working to get Fallon away from Liam makes me think she actually knows he’s her long-lost son. Hmm. That’s a tough one because I think even cold, heartless Alexis would have trouble playing it cool on that. So maybe she doesn’t know. But it wouldn’t surprise me if she did.

Interestingly, it seems like Alexis is trying to get Fallon to admit she loves Michael (Robert Christopher Riley) by spilling the beans about Michael’s father’s illness. But Michael’s mother asks Fallon to let her son go — and she’s not wrong to ask that. Fallon has really toyed with Michael’s emotions, and if she can’t go all in with him, she should stop messing with him. Fallon tries to do just that, but you know this love story is far from over.

Meanwhile, Cristal (Nathalie Kelley) is dead-set on Carrington Atlantic getting out in front of their power plant problem that gave over a dozen people cancer. Blake (Grant Show) pretends to go along with it, which gets Cristal to admit to a lawyer that she’s known about this since she came to work for CA. That now makes her personally liable, and Blake uses that as blackmail to get Cristal to keep her mouth shut. He then has some hired stooges shred all evidence of wrongdoing and warns Cristal that she should be very afraid of him.

I really wish this show would just decide to go with Blake as a villain 110 percent. He’s so much more interesting that way, but it’s like they’re worried about making him too unlikable, so instead he’s all over the map. I like this conniving Blake.

Overall, not the most interesting Dynasty episode ever, but there are only a few episodes left in season 1, and it set up what looks to be a pretty exciting three-episode wrap-up. I will give this episode one thing — that opening aerobics montage with Sheridan was amazing, as was Fallon’s response to it: “I thought this was Steven’s going-away breakfast, not a retirement home revival of Flashdance.”